Hope you folks enjoy your time of Thanksgiving. My perspective can get skewed by whatever challenges ensue as I prepare for holiday meals- my kitchen can go a bit bonkers in the flurry of preparations. At that point, I like to remember this quote by Alphonse Karr,: “We can complain because rose bushes have thorns, or rejoice because thorns have roses.” Choosing gratefulness here! 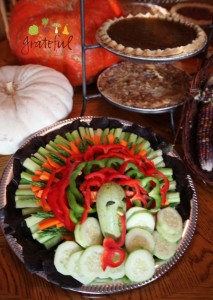 I’ve got some of the shopping done now- cranberries for chutney, yams, organic potatoes, Kabocha squash, pecans… We’ll make soup out of part of the squash, but the rest will be perfect for pumpkin pies. (I’ll just store it in the fridge for a few days.)

I grabbed some free-range chickens today; I’ll roast those, and make some stock ahead of time (for perfect gravy).

I’ll make some pie crusts too; they freeze so well, so I can do that ahead. I like to bake the pies fresh Thanksgiving morning, but it’s a breeze if the crusts are made already.

If there’s time to spare, we may make a cute veggie tray like the one to the left…

The following recipes are my faves for the holiday meal… maybe they’ll give you some ideas too! 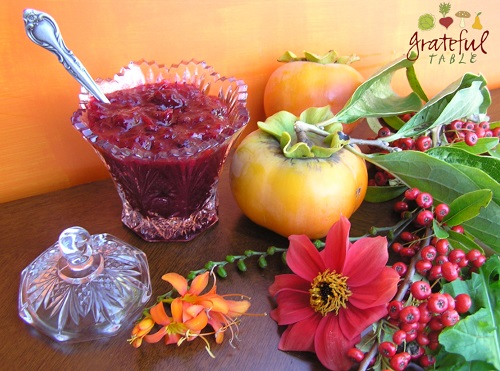 Cranberry Chutney: This can be made days (even weeks) ahead, and keeps quite well. This recipe is similar to the cranberry sauce recipe on the bag of berries, but you can get away with calling it “chutney”, thanks to the addition of a dash of cayenne. (Chutneys usually contain some kind of peppers, and other spices.) A little orange and cinnamon go well in this chutney, too. 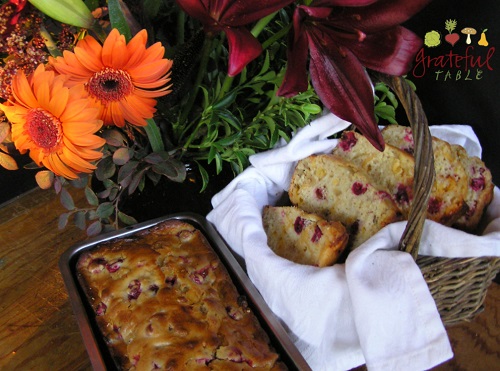 Cranberry Nut Bread: I usually prep the ingredients for this treat the day before, then just add the wet ingredients to the dry on Thanksgiving morning. Makes a great “breakfast”. No, it’s not exactly healthy-style or gluten-free, but it is made with all natural ingredients. So we splurge. It whets our appetite early in the day, priming us for the big meal! 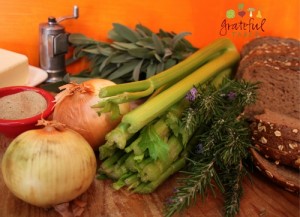 Stuffing, New Deli Style: Get creative, add personal favorites: Apple, raisins, sausage, pecans, wild rice, and cornbread… But use a good quality bread (artisan-style or other favorites); packaged dry bread cubes often contain additives like dough conditioners and such. Also avoid real soft, generic, brand-name breads that lack texture- they can deflate into a gummy mass; not what you want. Or try this gluten-free stuffing recipe! 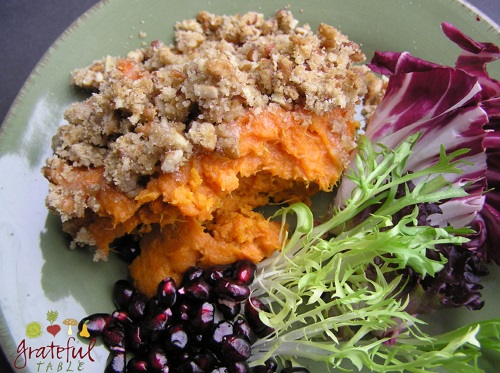 Sweet Potato Casserole: Yams have become the darlings of the paleo crowd; the preferred veggie to replace heavier starches like potatoes and grains. We like this recipe because the sweet potatoes turn out so moist and creamy; they have a bit more flavor baked in the oven or cooked in the slow-cooker, than when cooked in a pot of water. The nutty, streusel topping adds some texture. Make the whole dish ahead of time and rewarm in the oven. Delicious…

“Green Bean Casserole, Healthy Style”: No, this doesn’t have cans of onion rings and mushroom soup in it, but caramelized onion adds depth and sweetness. Topped with a few slivered almonds, this is one side dish that won’t stick to your sides!

Another plus: the onions can be caramelized days ahead of time. They’ll hold up well and can be stirred into the cooked green beans to serve. 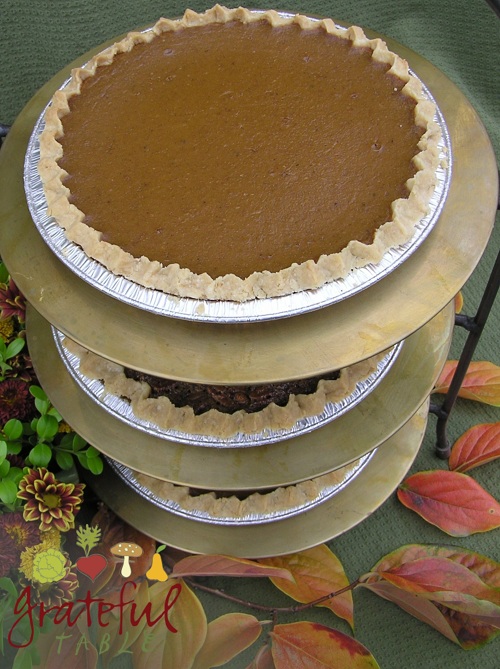 Pumpkin Pie: This is a traditional pumpkin pie recipe, but the crust gets baked some first, and the other ingredients (except the eggs) get heated before mixing the eggs in and pouring into the baked pie crust to finish baking. This helps the crust to hold up better (not so soggy!). Another idea to consider, if you’re feeling ambitious: Just before serving, sprinkle the top of the cooled pie with a generous layer of sugar and blow-torch it to carmelize it. This will top the pie with a crispy, brulee-style, sugary crust. But it has to be done last minute, or the caramelized sugar absorbs moisture and turns soft. Still tasty, but not quite brulee… 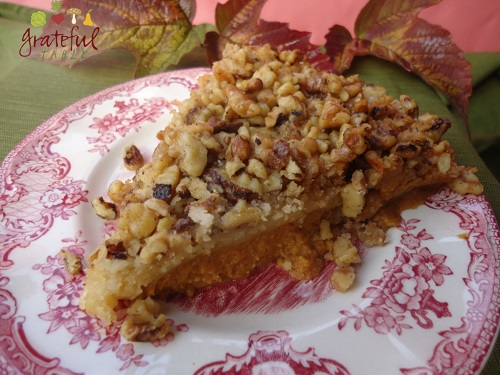 Pumpkin Streusel “Upside-Down Pie”: For those of us who don’t want to wrestle with rolling out a pie crust (or by one ready-made), this is a happpy solution. There is no bottom crust, just a nutty topping that is a delicious, crunchy contrast to the smooth pumpkin custard. A personal favorite of mine, especially since this particular recipe uses natural ingredients instead the box-cake mix suggested for other versions of this. 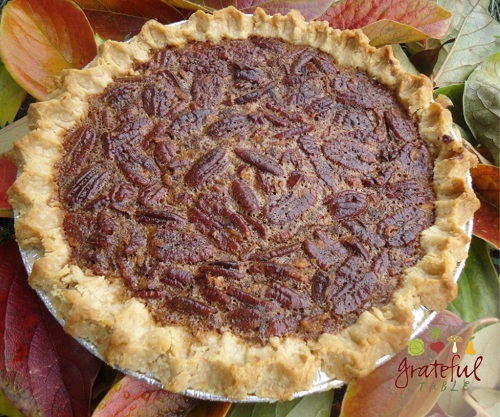 Pecan Pie: I was feeling a bit guilty about the corn syrup in this pie, but the Karo syrup label is assuring me- it’s not high-fructose corn syrup. Cool!! I make two at the same time, which is particularly handy since one bottle of Karo dark corn syrup measures out as the exact amount for two pies. If there is any leftover pie, it keeps well. “Keeping” isn’t an issue in our house though- it disappears fast! 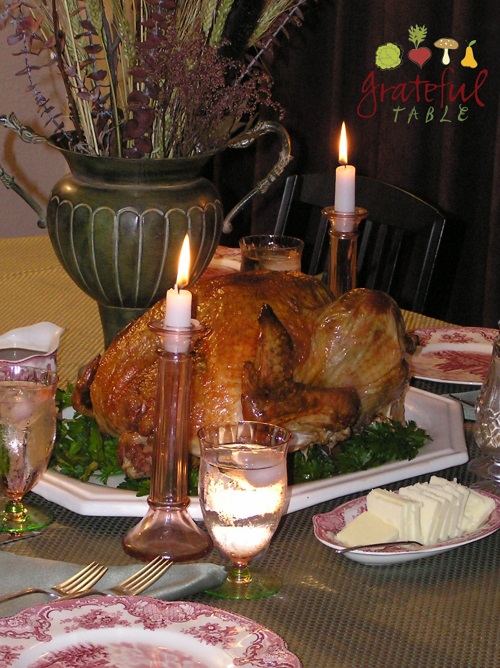 Last but not least is the Turkey Gravy recipe. If you’re cooking a turkey, you can make gravy. There are a few considerations, like if there are overly-done, charred chunks in the roasting pan. In that case, remove blackened parts. Other drippings in the pan should get mixed in with the flour though; they have loads of flavor.

After taking the turkey out of the roasting pan, some flour gets added to the drippings. For a larger group, increase the recipe as needed. If there is too much fat in the pan, set some aside. The ratio of flour to fat is equal; one knows it’s the right amount when the flour gets added and all the fat absorbs into it. If there is excess oil after adding flour, add more flour until the mix is smooth. But be warned: More flour means more gravy! (You will have to add more liquid as well.)

Homemade chicken stock, made ahead of time, is perfect for gravy. But a box of chicken stock will substitute.

Above all else, may you gather together together with loved ones. May we all reflect on the many wonderful blessings we have.