I’ve already posted my gluten-free corn bread recipe here; I thought I’d post this pic I just took of the batch of it I made for Thursday’s turkey stuffing. Because it’s not just a good corn bread- it’s a great dressing  to stuff your turkey with too! 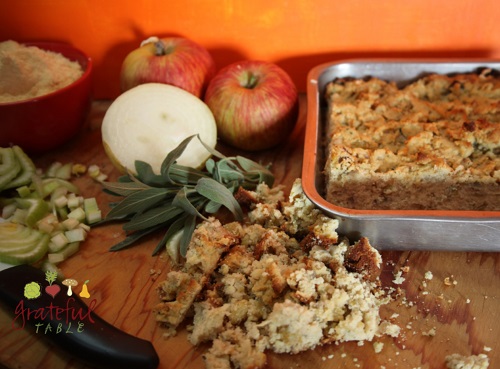 I experimented this year, using “masa corn flour” from the grocery store. It’s still gluten-free, though it wasn’t quite the same as the corn flour I usually get from the health food store. But either one works, for a delicious corn bread stuffing!

A lot of corn bread recipes call for part all-purpose flour, plus some generic corn meal. Using all corn meal gives the bread a little too much texture, and of course, adding the all-purpose flour ruins its gluten-free title. So the corn flour is a good substitute, helping the corn bread to have a better consistency.

You can do like I did and make a big batch of the corn bread, saving most of it for turkey stuffing. (It makes a nice side for one of those pre-Thanksgiving meals.) I think I’ll add extra sauteed apple to the crumbled mix, plus more sauteed onion, celery, and herbs  (like for the basic stuffing recipe I already posted), just because I like the idea of more veggies in my stuffing; makes it a bit more paleo.

Since we’re having enough people over to warrant cooking two birds, I’ll stuff one of them with the traditional stuffing, and one with this gluten-free corn bread stuffing. Something for everyone!