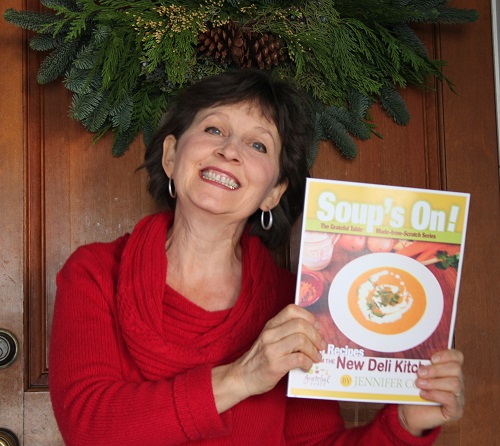 Below is an index to what’s found in my ebook, “Soup’s On, Made From Scratch”. These recipes can be found here at the website too, but if you want everything in one handy book, then order a copy! You can view ebooks on your computer, phone, Kindle, or tablet… pretty handy 🙂

Artichoke Garden Soup: Easiest soup ever?! I use Trader Joe’s frozen artichokes- they have a better texture than canned ones. (You can use fresh ones, if you have the time…) From there, you just add some steamed zucchini, some garlic, whirl it up in the blender with some chicken stock or cream.

Asparagus Soup with Tarragon and Goat Cheese: Cook up some asparagus (saving tips for garnish). A simple roux pulls this soup together.

Black Bean Chili: A hearty vegetarian soup; a protein-rich, flavorful, simple recipe. It’s an extra thick mix (that you add water to to serve), so it freezes real well into portioned “blobs”. Makes such an easy last-minute dinner!

Borscht: A great way to use beets, in a healthy version of a Russian classic. Containing potatoes, carrot, and cabbage too, and some toasted caraway seed for authentic flavor.

Broccoli Potato Soup: An extra healthy soup recipe. Potatoes thicken it, so it doesn’t need flour (yay, gluten-free!). The broccoli is cooked in water; use that broth to cook the potatoes. Then, the broccoli gets processed (with immersion blender or food processor); the potatoes get processed in next. They don’t go in at the same time, since a little over-processing will turn those potatoes to glue!

Cauliflower Soup: With garbanzo beans making it buttery, creamy. Roasting the cauliflower brings out its flavor, and toasted coriander seasons it perfectly.

Chicken Stock: Simple, but good. You don’t really have to put anything else in the pot, except some chicken bones (yumm, “bone broth”!). When using the stock in soups, other veggies, herbs and spices can be added then.

Chili, Traditional Style: Cook your own kidney beans! Much better texture than canned, plus you save money. And it’s a smaller carbon foot-print, since it’s easier to ship dry beans to your home, than to ship them to a processing plant that cooks them, plumps them full of water, and eventually gets them to a store…

Chipotle Potato Soup: There’s an easy way to make a “Chipotle Drizzle” (using dried chipotles, virgin olive oil, and a little boiling water and salt). Other canned chipotle products have a lot of cheap ingredients, and just a little chipotle in ’em. Just get the dried peppers!

Cream of Chestnut Soup: This is a classy soup. It takes awhile to shuck chestnuts, but there is a method that makes it a little easier. A labor of love, but worth it.

Cream of Corn Soup w/Cashews and Cilantro: What an easy recipe. Cashews can get presoaked, but because they’re already a softer nut, they’ll blend up into a nice “cream”. Add frozen corn (thawed), cayenne, and some cilantro for garnish. This is a good gluten-free, vegan soup.

French Onion Soup: A classic recipe, using saved up, frozen meat drippings and stock for rich flavor, plus a unique “roux” using some red wine vinegar instead of the usual Vermouth. Tastes at least as good, and it’s more economical.

Golden Pepper Soup: It’s nice to take advantage of produce when it’s cheap and plentiful. to use at a later date in things like this soup. Roasting peppers is a way to preserve them, and it is really quite easy. At The New Deli, we used to do them under the broiler, but found that a piping hot iron pan was even easier. We add the peppers, put a lid on it (yes, we have an awesome, heavy iron lid, which I recommend). Then we turn them every six minutes or so until charred/blackish on all sides. From there, we can make stuff like this soup. Or save the roasted, peeled peppers in the freezer- they freeze perfectly.

Green Chili Cheese Soup: So easy- mostly just some potatoes, with some canned tomato pieces added. As mentioned in the above paragraph, green chilis are easy to roast at home (or “cheat” and use canned). A little toasted cumin seed and cilantro add extra flavor.

Lentil Soup: The New Deli’s “hippie-style” soup, from our vegetarian days. Lots of soups can be vegetarian, but of course the ones with legumes in them will offer more protein. A dash of liquid smoke and some chili powder make this a pretty exciting soup.

Mushroom Soup, Creamy Style: You can make this the traditional French way, by cooking down some pureed mushrooms until they are fairly dry. The French then even dehydrate them more, then grind them even finer. This is how a very hearty mushroom flavor is achieved without just having a pile o’ mushrooms in the bowl. My favorite way to make this soup now is to just buy some Porcini mushroom powder on Amazon, because… well, the other way is fairly labor intensive. The porcini powder is so worth it. And then, making this soup becomes a total breeze!

Potato Cheddar Soup: This soup is made with an economical (but good quality) cheddar, even though it tastes like it was made with a fancy smoked cheddar. How’s that? Just add a touch of liquid smoke- a perfect combination with the creamy potatoes…

Red Lentil Soup: Popular for its quick-cooking, as well as its flavor; the sweet potatoes and curried spices add nutrition and an ethnic twist

Seafood Gumbo: Maybe part of the secret is in using shrimp with heads on (lil’ feelers and all). The heads made a great stock! This is a classic recipe, Cajun-style, made by heating and stirring the roux until dark and rich.

Split Pea Soup: a low-fat, vegetarian version of the classic.

Thai Curried Rice Soup: It’s tricky for that Japanese eggplant to keep it’s color, but there’s a healthier way to do that, without deep-frying. Adding green curry paste makes it exciting, although regular ginger can sub for the “galangal”, and lemon zest might do in place of lemon grass. Still good!

Tomato Basil Soup, using a unique blend of lemon, orange, and bay leaf, mellowed out with the addition of cooked carrot

Vegetable Rice Soup: Using a simple tomato paste/spice mix for a base (AKA “Thousand Island Mix“), just add veggies and rice, for a quick, easy soup.

White Bean Tomato Soup: Cook up some white beans from scratch- they don’t take much more than an hour. Add some canned tomato, some fresh rosemary and garlic. Oh, some kale goes nicely in this too!

Wild Rice Winter Squash Soup: Sometimes I need an excuse to cook up some wild rice- it’s so fragrant! For those with allergies, wild rice is of a completely different family than other grasses, so it’s usually a safe food in that respect. Good stuff.