I guess a lot of cooks are checking their resources today, so cooking a turkey tomorrow will be a breeze.

It should be a breeze! Practically all you have to do is pop it in the oven, and take it out hours later. 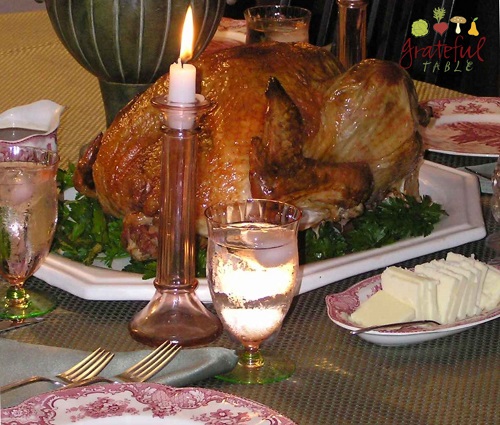 I don’t baste mine, but it still turns out so juicy. You might spread chopped fresh herbs in the cavities (or stuff it), but other than that, it’s pretty good to go. If you aren’t going for the “Norman Rockwell Style” Thanksgiving table. you could just cook that  bird upside-down (breast down), since the back side has juicier dark meat and more skin to render, effectively “basting” the turkey on its own. The breast (which can dry out faster) steams a bit more, being on the bottom. So good.

You’d think with all the cooking we do at The New Deli, that I might have a fancy oven at home. No. Remember, my husband and I were hippies, and we didn’t splurge much. Translated, that means that the simple electric stove that came with our house almost thirty years ago is the one we use. It doesn’t even have two racks, so that’s challenging!

But I can still pull off that Thanksgiving dinner with it, so I bet you can too! I have a routine that works, for Thanksgiving Day. I have everything prepped early in the morning, so that the pies can go in right away. Stuffing ingredients are also prepped, but other than a bit of stuffing herbs and such that I might brush around the inside of the turkey, most of the stuffing goes in a dish that I can heat up just before dinner.

Think about it: In the midst of all the last-minute preparations, before actually serving the meal, do you really want to be digging that stuffing back out of the turkey? I mean, you can. Sometimes, it’s no big deal, and it’s part of the tradition. But on other occasions (like when you’re having a larger crowd), might it not be more convenient if that stuffing’s already in a casserole dish, preheated and ready to serve?!

Some cooks suggest baking the stuffing separately, since the turkey takes longer to cook when stuffed and may turn out a bit drier. But there’s also the whole oven schedule to consider. If all kinds of dishes have to cook in that oven along with the bird, the bird will take longer to cook. A chart might say it’ll take so many hours to cook, but if you throw in variables, that time changes. Variables include: How many other things are cooking along with that turkey? Are those items cold to start, or room-temperature? (Because, all that will pull heat away, don’t ya know…)

A few more turkey tips: If you need to get the turkey cooked faster, cut the leg/thigh portion off. Cooking the cut-off leg/thighs alongside the turkey will help the bird cook quicker, insuring moister meat.

Another tip: Let the turkey rest before slicing. More juices will be reabsorbed that way. The latest I heard was to give it a 45 minute rest. Well, that’s convenient! Because any side dishes that need reheating can then go in the oven during that time, getting good and hot just in time for serving.

After the meal: Leave some meat in chunks. If not serving it all right away, chunks (wrapped in plastic wrap) will slice easily after refrigerating; perfect for leftovers, etc.