(Edited, January, 2023) I run into more people these days that believe (as I do) that ingesting isolated nutrients isn’t as ideal as taking a superfood that contain those nutrients in their natural, organic form. I suppose those of us with that mindset are still a minority, but the tide is turning. Slowly.

Back in 2014, I started making Kombucha and Kefir. I thought everyone else was on the same page, and that we could sell it at The New Deli. But nobody even knew what it was! Fast forward, and now it’s lining the shelves at Trader Joe’s. It’s become mainstream. IOW, if I give it time, maybe others will eventually want a good green drink recipe? Well, if its popularity with my Bible study group is any indication, there has been NO desire by anyone to gag down a nutrient-rich concoction, complete with beef liver powder and other suspects. (What happened to “Go Green”?)

Yet I still vouch for this stuff. I’ve got a few genetic predispositions, including hypothyroidism and cancer, which cause me to be extra proactive with my nutrition. And, I believe God gave us tools to be healthy. I love the verse from Revelation 22:2- describing the wonderful fruit trees lining the river, and how “…the leaves of the tree will heal the nations.”

So I will keep encouraging whoever will listen, in eating what is good. Like, this green drink! 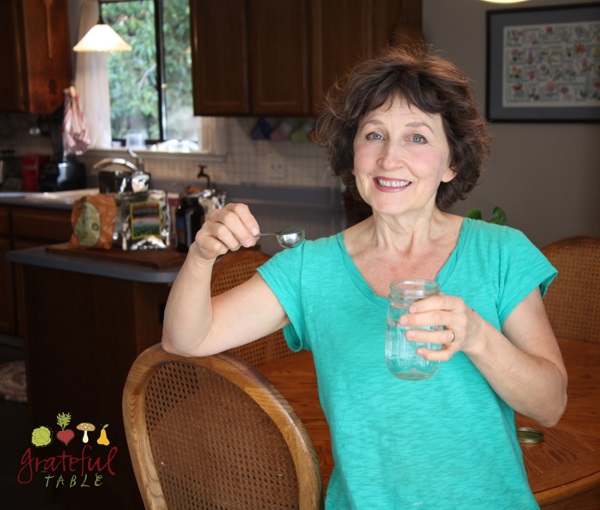 This alkaline and organic drink has easily-assimilated nutrients. And I can use better quality ingredients, like organic instead of conventional… And- it’s easy to order the bulk ingredients online.

To support hypothyroid health, check these posts too- Jen’s List: 8 Diet Ideas, or my Top Ten for Healthy Thyroid.

Add 2 TBS. mix to a small jar half-full of water. Shake it up and drink!

Use a big jar with lid on for mixing, if possible. Mixing the dried ingredients together and putting into jars can be messy–I cover the counter with newspaper, and transfer the messy mix into a paper bag, which I use to fill jars with. Yes, green dust all over, but hey, it does cost way less than buying a nice product already mixed. If you don’t want the bother, try some of the quality organic green powders available on Amazon, .

I originally took six capsules of Thyrogold to get the same effect that I was getting from my 97.5 mg. of prescribed thyroid. But by taking the extra herbs, roots, and other superfoods, I’m now down to two of the 300 mg. capsules.

But why do I try to avoid prescription drugs and the doctor visits it entails, you ask? Well…I’ve had a really bad history with the medical field, in the case of hypothyroid treatment anyway. Although I’m really glad I got diagnosed in 2006. I had so many horrible symptoms, and was “near death”, according to the doctor. Whew- close call.

But then the doctor troubles began.

First, after taking what I’d thought to be Armour thyroid (a natural form of thyroid gland), for six years, I discovered my pharmacy had scammed me. They had originally promised they could get me something akin to Armour Thyroid, which was unavailable at the time. In their mind, synthetic was “akin”. Ug. The nerve. They had substituted a synthesized version of Armour that whole time! (The pharmacist mansplained to me that the synthetic stuff was the exact same thing, chemically speaking, as the natural stuff. Sure…)

Was that why my health and well-being had gradually declined?!

In any case, eventually I stumbled upon the “naturalthyroidsolutions” website, and started in on my new, natural approach, taking OTC thyroid. My thyroid health improved and I felt terrific. The synthetic thyroid had been better for me than nothing at all (I was starting to really fall apart), but it never seemed to improve my health as much as the natural approach has.

But there’s more. To my saga of ranting misfortune with the doctor…

Years later, I went in for some other checkup, and the doctor said I’d have to get back on prescription thyroid. Even though I’d been feeling great for the past four years on the OTC thyroid. Doc said I’d need up to three lab tests- one to make sure I was at a good level now, one when I’d been on the prescription stuff for a month, and possibly one more, if we had to adjust the levels.

Really. What happened to, if it ain’t broke…

So… you might imagine why I’m kind of obsessed with this natural approach. Right?!

BTW- my blood pressure’s fine, ha. Even though the above tales could get it going LOL. But it’s all good. I’m feeling healthier than ever, and if I hadn’t had so many problems, I might not be this well off!

*Since writing another post on this subject years ago, I stopped adding the Heather’s Tummy Fiber and the Psyllium Seed Powder, since my digestion improved. I take this green mix at breakfast time, and t’s been working well.