If I’m going to make homemade sourdough bread using freshly ground whole wheat flour, I definitely need a system. Otherwise, I won’t have time for this! Below is the streamlined recipe I use every few days (when we’re getting low on our daily bread). 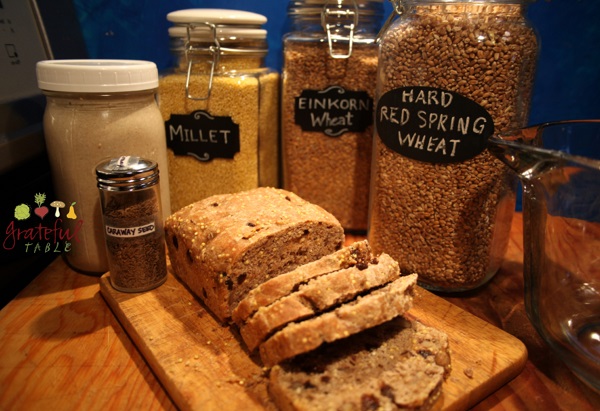 Considering that the vitamin E (and other nutrients) in wheat can go rancid so quickly, it just never seemed worth it to make bread with store-bought whole wheat flour. But I finally got a VitaMix blender, which grinds wheat berries into flour. At last, fresh-ground flour!

The other reason I hadn’t bothered with bread-making was that it didn’t seem particularly healthy. (You know, “Wheat Belly” and all that.) But a friend told me how she’d heard that some Celiac-sufferers could actually enjoy bread again, as long as it was sour-dough fermented. Guess it makes it easier to digest. That sold me on the idea.

A few years later, I’ve learned something else too. Hand-kneading seems to produce the best bread. I thought I could save time at one point, and I began using the dough hook and my KitchenAid to knead the bread. It did not turn out as good! I researched and found that the style of kneading does affect the bread. The molecules in hand-kneaded bread are actually shaped differently, while the machine-kneaded molecules are more stretched out. Not that the reason matters that much… just know that there doesn’t seem to be a short-cut to excellent whole wheat bread, without hand-kneading it.

I’ve also discovered that kneading bread on a wooden board (as directed in most recipes) makes for messy cleanup. Kneading the dough on a Formica counter top was an improvement, as the dough didn’t stick as much. I didn’t have to add as much extra flour to keep it from sticking to the counter, so the bread was moister.

But then I found the best method! I started kneading the bread in an 8-cup glass measuring cup, set on a towel (so it didn’t move around too much), in the sink. It was at a good height for throwing some hearty dough punches. So, it was easier clean-up, and I got a good work-out too.

Oh, one other thing I found out: Hard Red Winter Wheat (or hard red spring wheat) seems the best. I tried Hard White Wheat berries for a season, but the bread didn’t seem as good. After researching, I discovered- no wonder. White wheat might have a milder flavor, but it doesn’t have as much gluten. So the bread doesn’t rise quite as well. So- why not use the red wheat?! It does have an excellent flavor too, when fresh-ground. (Perhaps because it isn’t rancid!)

I still add a bit of “ancient grains” now and then- “Einkorn” is nice for variety. It won’t rise quite as well as the Red wheat though.

Experiment with any or all of the additions (raisins, caraway seeds, millet, palm sugar, walnuts and such). Adding extras will dictate a larger bread pan though—a cast iron skillet works well in that case. Makes one loaf (without additions), about 2 1/2 lb.

Into the empty jar of sourdough starter, add water, shaking well. Then add that water to the sourdough starter in mixing bowl, mixing well: > 1 1/2 c. warm water (around 105 degrees is fine, or warm to the touch)

Stir flour vigorously into the bowl of starter and water mixture, until smooth. Pour a scant quart of the mixture back into the sourdough starter jar, to refrigerate until next time.

To the remaining mixture in the bowl, add more flour, plus any optional grains or seeds. (The extra fermenting makes millet and seeds more digestible.). Use: > 1 scant c. more of frozen wheat berries, ground into flour (or use 1 1/2 or so whole wheat flour) > optional- millet, sunflower seeds, caraway seeds

Cover the dough bowl with a damp towel or with oiled plastic wrap. Let dough rise until doubled. This will take 4-6 hours in a cool kitchen, or quicker in a warm place.

After dough’s doubled in size, add salt and knead for 9 minutes or so. Optional items can be added, but will make a larger loaf (which will need a larger pan!).

Use coconut oil (or butter) to oil a loaf pan or skillet. Shape the dough into a loaf, rolling it in some organic corn flour or other favorite, to coat the outside. Set in well-oiled pan.

Let rise another few hours, until doubled again. Bake in a preheated, 400 degree oven for 30-35 minutes per loaf (or in skillet). For larger loaves, when goodies like raisins, millet and such have been added, let bake 40-50 minutes. Let sit for 10 minutes, then remove from pan to cool on a rack.