For seven years, I ate what I thought was a great, healthy breakfast. I even prided myself a bit on my discipline. I soaked buckwheat (or millet) overnight, rinsing and eating it raw the next morning with some dried fruit, cacao nibs, coconut milk, and soaked nuts.

Then I learned from the Paleo hacks, that grains are fairly indigestible if not treated properly. They contain anti-nutrients. (WHAT?!) They should be cooked. (Really?!) They should soak, or perhaps even ferment. (Not raw?!) 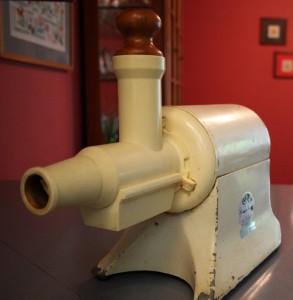 So. Back to the drawing board. I wasn’t ready to get out my Champion Juicer again. I like the idea of whole foods, but the Champion removes all the pulp. Then, to not feel guilty, you can save the pulp, and add it back in to stuff like bran muffins and such.

Whoa- way too much work! I’d heard from a friend that the Vitamix was a worthwhile gadget. She was bringing me smoothies every day at work (bless her heart!). They contained raw veggies (like beets, carrots, kale), pureed smooth and yummy. 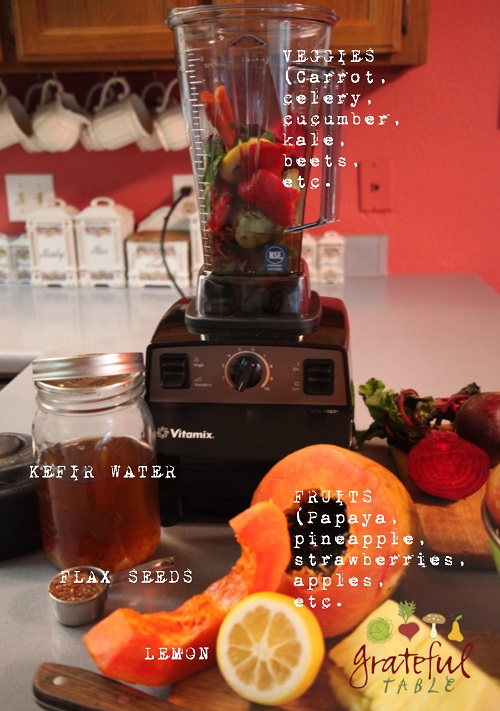 I tried an experiment. I used my “regular” blender to make such a smoothie. Of course I had to pre-grind my flax seeds in a little spice/coffee grinder, since I knew my blender wouldn’t do those. It still wasn’t smooth! And the kale tasted a bit like brillo-pad fibers in my mouth (well, not quite that bad). The beets were pretty chunky too. Switching to smoothies for breakfast wasn’t going to work if they were going to taste like that!

So I ordered a Vitamix. It arrived this past week. I discovered I could add flax seeds to the smoothie’s first run (which purees all the tougher veggie-type stuff). I didn’t even have to pre-grind the seeds!

Speaking of flax seeds, fresh-ground is the way to go. As with any other food loaded with PUFAs (polyunsaturated fatty acids), those oils in the flax seed deteriorate quickly once ground. Be wary of flax seed oil too (although capsules might not oxidize as quickly). And pre-ground seeds might even be rancid already. I used to grind mine every morning, in a little electric grinder

. It was worth it- they were so fresh!

As for the liquid part of the smoothie mix- I ordered some water kefir grains and started brewing my own “water kefir”. It starts with a jar of spring water mixed with 1/3 c. brown sugar and a teaspoon of molasses. The little grains are added, and for a day or two, they live off of the sugar, converting it into B12 and other vitamins and nutrients. (Not to mention, a ton of probiotics to keep your gut happy.) After one jar brews, I add the grains to a new batch of the sugar-water mix. The finished batch can go a step further- I usually leave it out for another day or two, adding a handful of raisins (or other dried fruit), some lemon slices, and perhaps ginger root, all to season it into a delicious probiotic “soda”. 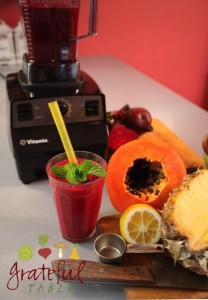 The finished product of my Vita-Veggie Morning Smoothie Routine? A few beautiful glasses of delicious smoothie, ready to share with my husband (and whoever else might be around).

One last thing: A helpful post on making spinach (or other veggies?) ice cubes, to use your veggies at their peak, and make the morning smoothie-making routine much easier. (From Carrie at “Roudy Stroudy’s“.) I’m going to start doing this, so I don’t have as many small pieces of this and that veggie to prep every morning! (I’ll just use a few ice cubes instead.)

I’m feeling so healthy I can hardly stand it!