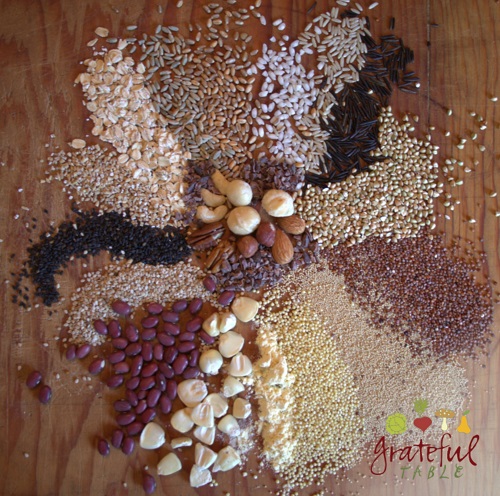 Bran is not  as trendy as it was ten or twenty years ago. I remember the days- we used to stop by our favorite bakery and consume mass quantities of sugary, sweet bran muffins (probably loaded with unhealthy oils too). I was having a bran fest- I even added raw bran flakes to my cereal. All in the name of “FIBER”!

Was it any wonder that I had some serious anemia? Bran is particularly rich in phytates, which can bind with the iron and other minerals in our system, which can lead to that anemia. Who knows what other health issues might have been connected to my “bran diet”?!

Bran is quite high in phytates; phytates can also be found (in lesser quantities) in grains, beans, nuts, and seeds.  So I’m not a bran fiend anymore. And I do try to soak my grains. Or I ferment them–I’ve really been into homemade, whole-grain sourdough bread lately. (Now that I have a Vitamix that grinds my whole wheat berries into  fresh whole wheat flour…)

Not that I’m not going on a Phytate Rant here. Phytates can be good. Consuming them in our foods probably isn’t going to upset the average person’s health. One caveat: but it might.

Just as in the bran days of yore, any one food trend might lead to unbalance, as the misinformed attempt to overcompensate, adding too much of a good thing to their diets. One of the latest trends is the “Gluten-free” craze (and the GAPS diet). One catch: folks might start chowing down on that gluten-free cake, made with almond meal instead of flour, on a fairly regular basis, telling themselves that this will help them to avoid gluten and regain health. The cost might be a phytate overload…

That was me. After bran went out of style, I forgot about it and prided myself instead on eating “healthy” breakfasts of raw, soaked grains topped with nuts, cacao nibs, and coconut. Another vegetarian meal or two might follow, featuring beans and/or grains. A snack or dessert might include a treat high in cacao nibs and nuts. Ironically, that particular diet of “wholesome” whole foods might have been slightly unbalanced. (Ya think?!)

Not to sound the alarm. There is a plus side to ingesting those phytates. Yes, they are enzyme inhibitors, but also: They can bind to excess minerals in our system. This is a valuable service, considering that excess iron generates free radicals in our bodies. So, while excess phytates might be a problem for an anemic person (like I’m prone to be), they would help someone else who was prone to an excess of iron.

Also, phytates act as antioxidants. They can even fight the proliferation of cancer cells, and improve cardiovascular health. One other feature: They might lower a food’s glycemic load, for the very reason that they slow digestion.

In conclusion: Moderation is our friend. We might consider reducing a potential overload of phytates by soaking some of our grains, beans, seeds and nuts (this will break down phytates, allowing for easier digestion). We might make bread (the yeast/fermentation process decreases phytates), and we might toast some grains, seeds (which also decreases them).

But, unless you’re going off the deep end (like I’ve often done), you can probably just adhere to this simple rule: Eat a sensible diet, be aware of the danger of raw nuts, grains, and seeds consumed in excess, and then… don’t worry about it!