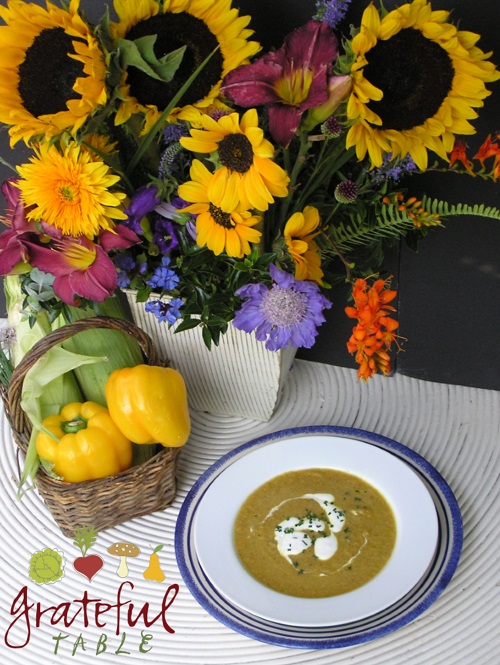 We did a taste test today for a recipe I’ll include in the new soup ebook (due out this fall). Just roasted some yellow peppers, adding to a puree of poached pear and corn. A dash of nutmeg and salt (plus chicken stock, if desired) was all it took to put this over the top. We added creamy goat cheese to ours at the deli, since we always have fresh goat cheese around. Yum!

So I’m back to work on that ebook. It took a lot of research. A lot of pondering. And that was after working up bunches and bunches of recipes, tweaked hundreds of times, for home cooks’ kitchen success.

I personally thought it would be pretty cool to have all my recipes in one spot (like, in an ebook), that I could access on my phone, wherever I might be (grocery shopping, in the deli kitchen, in my home kitchen, or at a friend’s). A few other folks might agree. (At least a few at the deli concurred.)

But I’ve been held up on the project for a year. Where did a year go?! Well, I had to research my publishing options. To start, I looked into the cost for publishing a hard copy of over two hundred and thirty recipes, including photographs.

Cost prohibitive, that’s what that is!

So I looked into how to format for ebooks. I couldn’t publish that large of an ebook either; there’s a file size limit of 5 MB, and with photos, mine would be bigger than that.

But that helped me develop a plan. Lord willing, I will soon join the ranks of self-published authors putting out their own ebooks; I’ll start with one on soups. I’m excited!

I had some “custom self-publishing” done for my first cookbook (From the Land of Milk and Honey), which went out in hard copy. But that gets expensive. I love it that I can put out an e-cookbook for less of an investment (except of my time). And no trees will be cut down in the process. Welcome to the 21st century, right?!