Let’s just say this post is a bit like “a word from our sponsors”. That’s because, if you happen to order anything on Amazon, starting with any links from Grateful Table, even if you don’t get the original product, it’s still credited to my account! So, thanks for that 🙂

But once I’m done with this “sponsor” business, I hope to get back to just posting recipes. I mean, Valentine’s Day is almost here! And I’ve got to post my latest chocolate dessert. So… moving on. Right after this “word from” business… 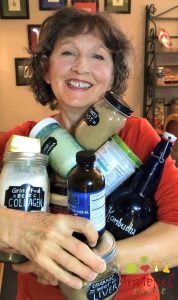 The new year has brought a new perspective. Every time I turn a corner, at home, at the deli, in the garden, I see MORE things that need attention. The website is no exception. And since I’ve gradually modified my health routine, I better update that here.

– If you’re around my age (60), and you remember the Geritol ads for those with “iron-poor blood”, then… you probably need these! Or, if you’re a busy mom, or anemic, etc. Forget iron pills- it can be difficult to assimilate iron in this form (and they can be constipating- ew). Best assimilated is the iron found in beef and red meat, particularly in the liver. If you’ve done a little sleuthing and noted that the iron levels in liver aren’t as high as in some other foods, don’t be fooled. Who cares if iron ore is 72% iron, if you can’t assimilate it! But the iron in liver is absorbed very well. (Even more so when taken with something acidic, like orange juice, kombucha, etc.) (I like to get this powder, mixing it into my morning green drink- it’s a bit cheaper than the capsules.)

– Maybe it’s ‘cuz those mountain goats are chowing down on grasses grown in mineral-rich soil, that hasn’t been stripped of nutrients by farming. But this stuff has twenty different macro and trace minerals, easily absorbed by humans. I feel terrific taking a tablespoon of this a day (I notice when I don’t).

– Back in the day, working at a health food store in the eighties, I knew all about brewer’s yeast- how it was loaded with B vitamins and other good stuff, like Chromium. And going farther back, science class in high school, I heard a lot about the importance of these nutrients in our diet. Fast forward to modern times… I just don’t think the average food is all that loaded with nutrients anymore. So I add some brewer’s yeast to my morning powder mix. I particularly like this Solgar’s brand, since it isn’t “fortified” with synthetic B vitamins. Come on- I just want the superfood, not something some scientist created. I’ll trust God’s supply any day!

-I originally got this stuff to address a dental issue my husband was having. I found a bunch of references and positive comments on Amazon, about it helping those that might need root canals. All I know is, the one dentist insisted that Tom needed two root canals; after several months on the CLO, he ended up with one root canal only, and has been doing great since. Now I personally keep taking it to keep my Omega 3/6 ratio in balance. (It’s otherwise quite difficult to get enough Omeg 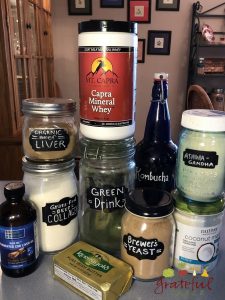 a 3s in the diet.) These capsules are handy, but if you prefer the liquid, this cinnamon-flavored Liquid Fermented CLO is great!

“- Maybe it’s good to say just what specifically a particular item is good for. Because it can psyche us up to be on the lookout for benefits! If I can’t sleep, I should remind myself that I’ve had some Ashwagandha, so there’s no excuse. Ha. I know it doesn’t work that way, but maybe kinda sorta? In any case, this is a root powder, kind of like ginseng, supposedly good for thyroid disorders too. It’s an “adoptogen”, which means- whatever’s wrong, it’ll fix it. OK, can’t go that far. But maybe it has improved my focus and energy.

““- Some of us might want to do a heavy-metal detox, or a cleansing diet. Chlorella (a little seaweed-type powder) should be a part of the process, since it binds with mercury in our system to aid in its removal. I guzzle an 8-ounce container of water with a scoop of this mixed into it every morning, first thing. It tastes a tad fishy. OK, so it’s not for everyone…

–Â  The label for this grass-fed collagen now says its for “Anti Aging” too. Well, what I noticed was that it was SUPER great for inflammation. It’s been suggested that inflammation is at the root of all disease. For me, whatever the form that inflammation takes (swollen joints, arthritis, fibromyalgia, etc.), it’s better not to have it. And while I haven’t been part of an authentic field study (OK, this is just “anecdotal” evidence…), all I know is- I had swollen knees for several years (couldn’t run, experienced some pain). And now my knees are great. I’m even running up hill as part of my morning routine!

Kombucha– I’m a fan. It will keep your gut happy, which means better digestion, and a happier mood. (Somehow probiotics affect the brain in a positive way.) I’ve got a recipe here for Jun Kombucha, which is the tastiest (made with honey and green tea). But the black tea and sugar Kombucha is also so good for you. Water Kefir is another option.

Fat– I could go on a rant here, but I’ll try to control myself. It’s probably easiest to say: minimize intake of certain fats. Like, polyunsaturates. They aren’t good to cook with (article here), and are often rancid (“rancid” spells death in some language). A monounsaturated like olive oil is a good choice (like those Mediterranean folks use). Or coconut oil, loaded with MCTs for health (or , which I love putting in smoothies). Or even grass-fed butter (like Kerry Gold).

““- I’ve linked to the model that includes two black filters (which need cleaning on occasion, but don’t need replacing), plus two fluoride filters (which do need replacing, usually annually). It’s an important tool for your health! The chemicals in treated water are probably not good for us, but I’ve actually SEEN the effect it can have on other living creatures. I’m talking probiotic critters here. My water kefir grains stopped growing at that point when I needed to change the filter (with our water usage, that’s about once a year). No joke that chlorine can suck the life out of probiotics on the kitchen counter, so no telling what it might do inside our gut, ya know?

OK- that’s all, folks. You are now updated on what kinds of crazy things Jen has for breakfast. It’ll soon be time to move on to possibly more exciting topics. Like, dessert or something!