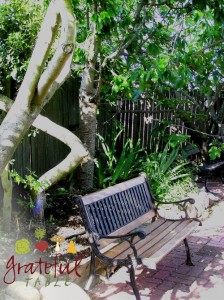 You can make out a corner of our “jungle” in this first picture. Twenty-eight years later, full of mature trees. That same corner of the yard didn’t look that lush when we first moved in! That was back when we thought having chickens would be a good thing… (You can see a picture from 1986 on the left, featuring my dad feeding the chickens. The trees were pretty small!) 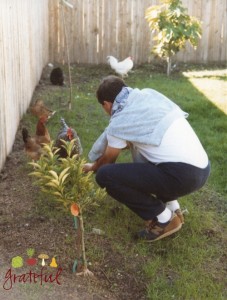 We also had a puppy. Briefly. A friend had convinced us to adopt a Doberman Pincher puppy that needed a home. Big mistake! Miles was 3 years old, the “puppy” would barrel him over, not to mention, chew everything in sight. 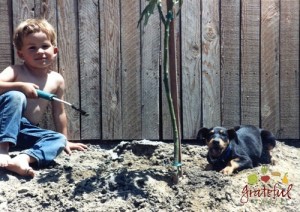 Both she (“Lenka”) and Miles look so relaxed, sitting next to the avocado tree we’d just planted. (Which is now two-stories tall!) She looked pretty harmless in the pic on the right, but don’t be fooled.

Lenka saw to it that the drip system we’d put in got chewed up; the seat belt left hanging outside the car door got destroyed… even the plastic-encased metal rope we used to tether her to a long line in the doggy run area got chewed up. It was crazy. Didn’t last. Put an ad in the paper and found her a new home… Even though she was awfully cute. As a puppy. 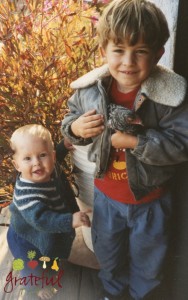 Meanwhile, we procured some cute baby chicks and ducks. They ate pretty much every new plant I put in. They had their good points while it lasted: Great eggs and good fertilizer. They ate all the deli veggie scraps that we brought home. Great compost!

Alas, that too was not meant to last. I had tried to keep the rooster from bothering our little toddler, but it had jumped up and pecked on baby Tyler’s head one too many times. It was almost mocking us! Grrr– Mama bear was angry! Mind you, I was not really a frontier woman. I didn’t have a sharp ax to chop off the chicken’s head. (They say that’s a messy way to do it anyway.)

But I did wring its neck. This was in 1989, before I even knew about the internet, or I could have looked up this article on how to properly kill a chicken. I would have then known that “wringing its neck” (despite the expression), is not the best way to accomplish the task. Peter Dickerson’s humane directions (whereby the head is quickly detached in a particular grip, while holding the bird upside-down) would have been better to follow…

I do not recommend chicken slaughtering for the majority of us. As disturbing as killing it is, it will also continue to move around a bit (even when killed humanely). They say it’s “just the nerves”, but it’s very unnerving! I held my poor old rooster down, that last minute or two while he twitched, and I cried.

A freshly killed chicken also needs to be “dressed”. You can watch a video here, on how to do that. I didn’t have the video–I was on my own, pulling weird stuff out of that bird, and, well… it got pretty gross!

I didn’t want to eat chicken for quite some time. I did try to turn that old rooster into good stock for soup. The meat tasted like rubber bands, and I couldn’t quite stomach the chicken stock after the traumatic experience. I haven’t killed my own livestock since, But if I ever try again, I’m going to follow directions!

Now we just have a cat. And a few fish in our pond. That’s about our speed right now. And there’s enough stray cats around, siting on fence posts looking pretty, that we never get too lonely for a new pet…