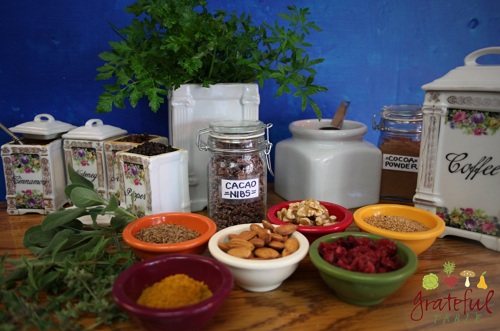 How cool is it that God so wanted us to have exciting food, that He put extra nutrients into some of the most flavorful ones?!

Not that “ORAC” is an especially appetizing name. But it’s a lot easier than saying, “the oxygen radical absorbance capacity”. High ORAC value means that less free radicals may form. Free radicals may increase potential for disease and premature aging. We don’t want that.

There is some controversy about the topic. The USDA had a list of high ORAC foods, having studied them for ten years. But in May of 2012, they withdrew the list, as test results were not conclusive.

Do I care if the actual scientific fact is that it’s not the “compound” I just ate, but the byproduct of digesting that compound that is responsible for my blood’s increased antioxidant capacity?! No! And I don’t think my body cares either. Fact is, my body’s happier when I eat some high-ORAC foods. That’s all that counts, right?!

OK, USDA… to be more accurate, we might claim the value of colorful, flavorful foods, which are high in polyphenols (of either flavonoid or non-flavonoid form). The USDA does admit that these foods have a positive effect on heart health. Such foods have been found to be antioxidant, anti-inflammatory, and anti-carcinogenic. Good enough for me.

So… I could present you with a list of “Colorful, Flavorful Foods High in Flavonoid and Non-Flavonoid Polyphenols”. (CFFHFNFP- what an acronym!) Or I could just keep calling ’em the “High ORAC Foods”. In either case, I rounded up some foods from my cupboard (or garden), loaded with good stuff, to inspire you. Here’s a List of High ORAC Foods:

What might you have in your cupboard or garden, that you could add to your meals? Every time we spice up or season a dish, we can raise that “oxygen radical absorbance capacity”. My friend even suggested adding turmeric to tea. I discovered that a delicious pick-me-up brew could be made using turmeric, cinnamon, cocoa powder, and coconut cream. Starbucks, step aside– this is a way healthy super-charger.

I guess it’s no surprise that America’s #1 source of high ORAC food is generally… coffee. But ethnic dishes are typically loaded with heavy doses of high ORAC foods due to liberal use of herbs and spices. Maybe it’s time we expanded our horizons too!