FYI- this is the extreme recipe I used at first, when I was overly ambitious and thought I’d go all out, even using fresh turmeric, which I could only find at one certain health food store (not in our area).

Check this recipe out for a more-streamlined version! 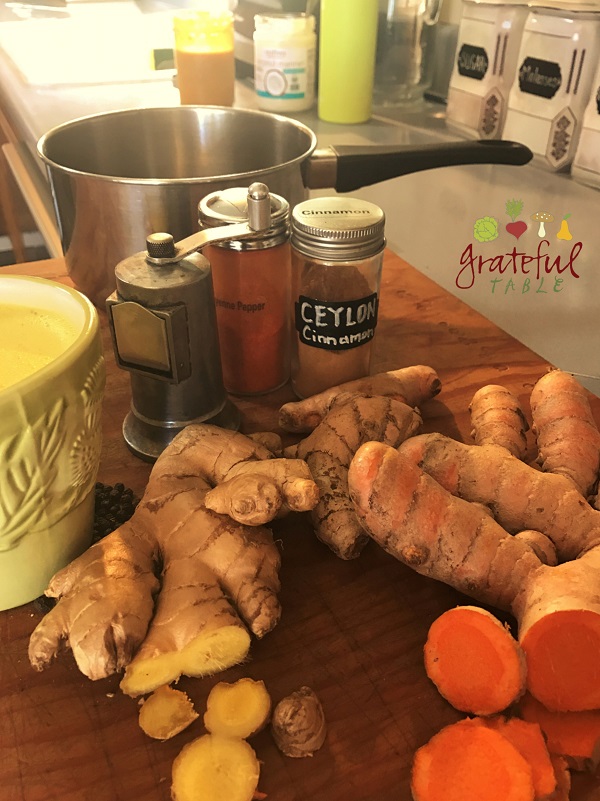 Most golden milk formulas include a few particulars. Like, black pepper and Ceylon cinnamon (the best of the various cinnamon varieties), which work synergistically with turmeric to increase absorption of nutrients.

Once I’ve made a batch of Golden Milk Paste, I like to blend it with some “Nut Milk, Bullet-Style” (same idea as “bullet coffee”). Adding coconut and butter to the golden milk helps sustain good energy levels; the healthy fats level out sugar levels.

Heating the turmeric mix helps bring out more of the healing qualities, hence the method. This mix keeps two weeks, refrigerated, so freeze some of it (or make a half recipe) if not making several drinks of it daily. Makes about 10 ounces of concentrated paste, for quite a few drinks.

Slowly stir in the boiling water and simmer for 10-20 minutes, to get the flavor out.

Stored in glass jar in refrigerator, this will keep for two weeks or more. Or, freeze some of it, to prolong shelf life.