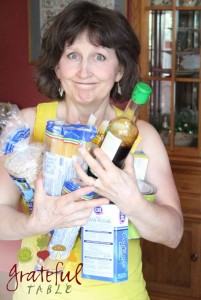 My (older) woman friend is feeling pretty hip now. She was in my Healthy Eating class at a recent retreat, and she learned a new buzz word: “GMO”.

GMO stands for “genetically modified organisms”. GMOs are relatively new to the human diet, which makes the study of their long-term effect on generations difficult. (See a list of common GM foods here.) They are not the same as “hybrids” (which can occur in nature). See more info on hybrids here.

Monsanto and other bio-tech companies are heavily invested in providing the world with GMO seeds, to grow cheaper crops while yielding high profits for the companies themselves. Yes, those seeds provide food for an enormous population, but at what cost? One expense is that new seed must be purchased each year, as any seed from GMO plants will not be true to form.

Companies like Monsanto have huge resources available: advertisers in television, lobbyists in government, lawyers in litigation. A controversial rider was just anonymously added to a recent budget bill; it would protect U.S. biotech companies from litigation if their GMO seeds turn out to be dangerous. (See article here.) To find more online; look for “Monsanto Protection Act” (officially labeled, “Farmer Assurance Provision” by bio-tech companies).

I personally have chosen to eat less food, but of higher quality, than to eat more of lower-quality, cheaper foods. At least we have a choice!

“Organic” Does Not Mean “Non-GMO”:  Shopping organic is great, but unless it says, “NON-GMO”, you can’t be sure. Whole Foods Market has pledged to label all their foods, whether GMO or not, by 2018, the first to do so. I’m excited about that, and meanwhile, I’ll gladly support any company already putting that on their label!

I don’t mean to get obsessive-compulsive. I’m not going to stop eating certain foods; I’ll just eat less of them. I love the verse, “Since everything God created is good, we should not reject any of it but receive it with thanks. For we know it is made acceptable by the word of God and prayer.” From 1 Timothy 4:4-5.

One might argue that some of these new “GMO Foods” are not actually made by God but by man. Alas, we best say our prayers, try to be wise, and hope for the best!