OK- I really wanted to believe those super-handy, packaged beets would rate about as good as fresh, even if they are a bit more costly. A lot of us won’t buy canned beets, but Trader Joe’s has some “steamed and peeled”, packaged beets in their fresh vegetable section. They’re perishable, so they must be pretty natural! No extra anything, just beets. And- they’d be so much easier to serve. 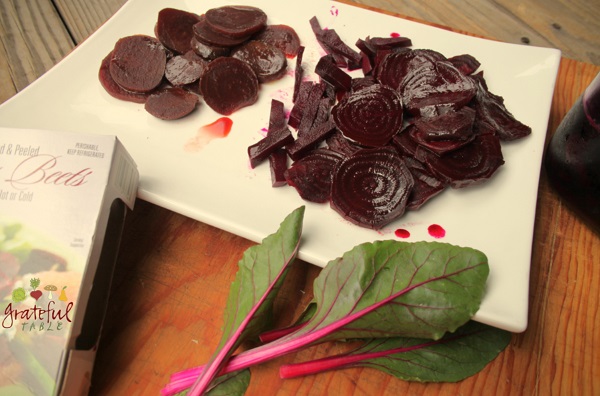 An 8-ounce package of Trader Joe’s steamed beets cost $1.49. Not baa-a-a-d… Of course the fresh beets were cheaper- $1.49 for a whole pound. But the fresh would be a lot more work. So… would the packaged ones taste all right?

They DID taste all right. The first time. But next time, I bought both fresh and packaged, to do a side-by-side taste test. The fresh ones had much better flavor, color and texture. Also, the juice of the fresh-cooked was intense, deep fushia colored; the packaged ones had a much wimpier, browner colored juice.

After home-cooking my fresh beets, the yield of “beet meat” was a third less. So, it cost $1.49/lb. for what ended up being 2/3 lb. Oh well. They were delicious. I suppose if you’d rather save time, and flavor/nutrition/texture isn’t your biggest concern, get the packaged ones. They are probably better for you that a bag o’ chips fried in PUFA oil!

I’ll be going back to steaming, roasting, or simmering my own. They’re just so much better.

More in my beet quest: I also experimented with fermenting beets. Naturally fermented raw beets, not like the canned pickled beets available. (I wanted my probiotics!) So I got my gloves on, prepped a big bunch of beets, added salt, and let ’em ferment. I added sauerkraut juice to the mix to speed things along. They still didn’t ferment as quickly as sauerkraut. But I finally ended up with a jar of “pickled beets”. They’re good! I’ve used them in an occasional batch of Borscht, and on salads. There was the initial time investment (peeling, slicing), but the fermented beets last a long time. I shouldn’t be needing anymore packaged beets. Ever.

Side Note About Beets: Maybe THAT’s why some Russians have lived long, healthy lives? Among other things, beets contain polyphenols and betalains (antioxidants); also- betaine, which encourages the liver to eliminate toxins. Oh. Plus, then taste good!