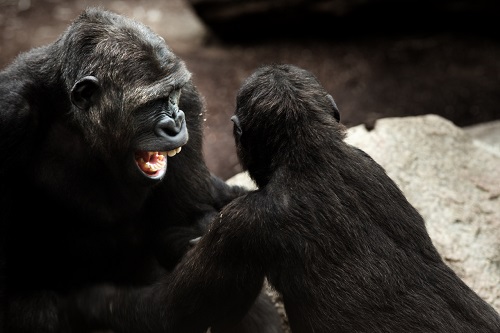 Maybe I’m getting too old for this blogging stuff. Even my silly title won’t be understood by new generations. After all, it’s a reference to a goofy song by Helen Reddy, from the seventies: “I Am Woman“. (“Hear me roar” is part of the lyrics.)

And I don’t mean to raise a stink, but I take the Bible literally. I don’t think my ancestors were monkeys. I actually do believe my ancestors were Adam and Eve, and that they ate the plentiful fruits, nuts and berries that grew wild in that original Garden of Eden.

Given that, I could imagine why some folks would be keen to recreate that diet in their own lives. Raw foodies might even say, “Hey, this is how we were meant to eat, before sin entered in.”

But, sin did enter in. And since God is timeless, He already knew that would happen. So, I don’t think He created the Adam and Eve Model without taking into account that sin was going to happen. Adam and Eve would be banished from that Garden, their diet would change, and God knew it.

I think God had already addressed what physical necessities there would be when Man’s lifestyle changed. Since the Bible talks so much about cultivated crops, grains, olive oil, meat and such, I believe God created us to be able to digest all that stuff.

It would be a bit short-sighted if God had built us one way, and then said, “Oops- that’s not going to work. Oh well. Sigh.”

Not that I’m trying to lay down my own idea of a perfect diet. Who’s to say what’s best for someone else? I love Paul’s words (in the God’s Word version) of Corinthians 8:13: “Therefore, if eating food [offered to false gods] causes other believers to lose their faith, I will never eat that kind of food so that I won’t make other believers lose their faith.”

Bottom line: I don’t want to be more focused on food than on God. There’s a lot of info on healthy eating, but much of it is contradictory. That’s messed up. How much simpler to just recognize, “Everything God created is good. Nothing should be rejected if it is received with prayers of thanks.” (Timothy 4:4)

Ideally, I’m eating to nourish my body with what God has provided. Sometimes, that might be a shared meal that isn’t what I’d normally eat. But that’s OK!

Life is much simpler when we turn to our instruction manual: God’s word! He tells us, “He who seeks to save his life shall lose it.” Maybe a lot of folks try to save their lives through diet. I know I have! I tried every approach. And while it’s good to eat fresh, whole foods, one shouldn’t obsess about it, right?

I can imagine there are some legit diets for improving health issues. For the person used to living on junk food, almost any of these diets will be an improvement.

Enough thoughts for today. Anyone else want to weigh in?