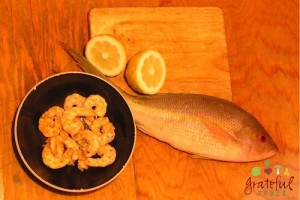 Some folks eat fish because they love it, not just because its healthy. Other folks don’t much like it, but figure they better get their Omega 3’s. Note: If you are into fish for health reasons, look for wild caught, especially salmon- it’s loaded with the oils you need. (Read this article or this one, on why wild is so much better than farmed- quite convincing!)

And still other folks hate fish. But maybe it’s because they’ve never had fresh fish. That can make all the difference.

From a  culinary standpoint, you really can use frozen fish on certain occasions, for various reasons.

However, a recent purchase confirmed my other suspicion: That fresh fish from a reputable source is better than anything. I had worked up a recipe for Baked Tuna (posted here), and it works quite well with the frozen tuna steaks I pick up at Trader Joe’s. Meaning, it’s tender enough, and pretty tasty in general.

But then I picked up some “Sear-Grade” tuna from a local specialty shop (“Berkeley Bowl”, to be exact). Wow. There IS a difference. I had bought fresh tuna steaks from another shop before, and they had seemed just a little better than frozen. But the “sear-grade” was what I’d been looking for. It was more like the stuff I eat on special occasions at fancy restaurants. In such establishments, they typically sear the tuna; it’s often “encrusted” with something exotic, like ground black sesame seeds and Wasabi powder, etc. The restaurant entree is always insanely tender and delicious, even cooked rare.

I can now officially tell you: Maybe you DO get what you pay for. The “sear-grade” tuna costs a bit more than other options (except “sashimi-grade”, which is an even better grade). But it is a special treat.

If the pocket book says no, or the convenience factor of Trader Joe’s frozen tuna steaks is too high, stick with a simple baked fish recipe. But if you can afford the treat, go for “sear grade”!