This soup gets its color from grilled carrots. The veggies simmer until tender in a covered pan, with some water added; as the water evaporates, the sugars in the starches caramelize, making a rich, flavorful soup. Extra virgin olive oil adds richness without the saturated fats; a healthy soup- even vegan! 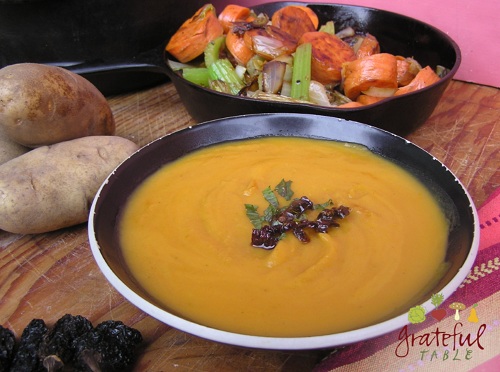 The deep, smokey flavor of the chipotle peppers gives it a kick. Using dried chipotle peppers (found in many supermarkets’ spice sections) is most economical and lends more chipotle flavor than canned goods containing only a small percentage of chipotles. Depending on the quantity of veggies used, this healthy recipe serves 8 or so.

1. In a very hot skillet or pan (preferably iron), sear chopped veggies: > 2 dried chipotle peppers, or to taste > 1 large onion, chopped in large chunks > 2 large carrots, in chunks > 1/4 of a bunch of celery, in chunks

2. Add a big splash of water to the pan now and then, to allow for more steaming of the veggies. Turn the veggies as they brown, letting them continue to brown on high heat. This will caramelize the natural sugars in the vegetables, adding extra flavor.

3. Once the veggies seem well-browned, add them to a pot, also adding: > Approx. 3 lb. or so potatoes (about 4 medium large), peeled and cubed > enough boiling water to cover

4. Simmer vegetables until tender (about 20 minutes). Process with an immersion blender, or use a food processor, taking care not to over-process (or potatoes can get too starchy). Also add: > 1/3 c. olive oil > 1 1/2 tsp. salt

5. To use chipotle peppers for garnish, prepare some extra peppers by slicing a few and microwaving in a small bowl with a splash of water and oil. Garnish the soup with: > Parsley or cilantro > the extra chipotle peppers