The new year’s almost upon us- thought I’d post a few ideas for “out with the old, in with the new”. So… if you’ are also dealing with old kitchen cupboard shelves made of particle board, this is a real cheap alternative to new kitchen cupboards! 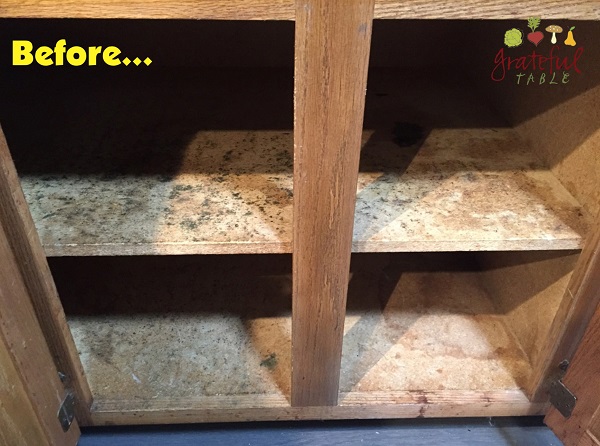 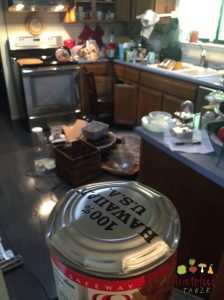 First job: cleaning those cupboards out. I found stuff I’d forgotten about. Like, a bulging can of pineapple that expired in 2005. Not sure when it started oozing pineapple goo onto the cupboard shelf. Shame on me!

Once everything came out of the cupboards, I realized how nasty the shelves had gotten. After all, the shelves are 30-year-old particle board. Nothing like the fancy, wipeable shelves they have now. So… I researched. Contact paper’s not going to stick to that stuff. Plus, the first product I tried was so thin, pots and pans would just tear it up.  But check out the “After” pic! Someone on some forum mentioned using adhesive tiles for such shelving. It was easy enough to put in, and it’s super durable. I’m so excited that the shelving looks way nicer. And… my husband’s excited that it was way cheaper than a whole cupboard-replacement venture. 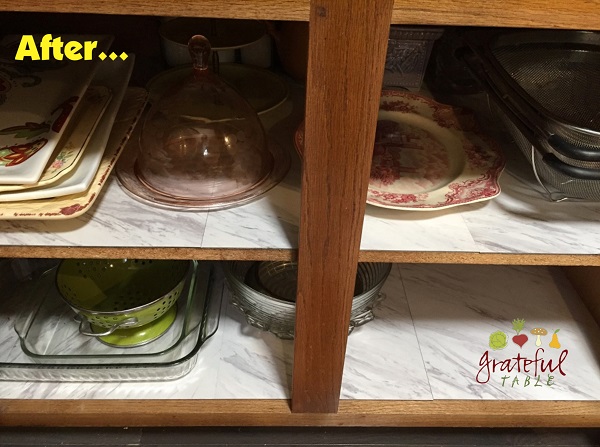 The outside of the shelves still looks pretty decent. A friend suggested paint, but I wasn’t too keen on that. My daughter-in-law has had enough bad experience with those for me to want steer clear of that. Yes, she and our son had professionals paint their first kitchen cupboards. Including the finishing protective coat. They still started chipping within the first few years. In their second kitchen, the cupboard were already painted. They looked bright and cheery. The first year. But those too started chipping…

I’ve continued to keep the outside of our old cupboards in decent shape by using citrus oil on them occasionally. It nourishes the wood and brings back the shine. Cheapest redo ever!