Let’s not obsess-  I’m not going to stop eating foods I love. And some vitamin C-rich foods, taken in conjunction with even a high-phytate, iron-blocking meal, can improve iron absorption. But I do think I’ll SUPER-charge my morning smoothie, and take a few of these beef liver tablets on the side! 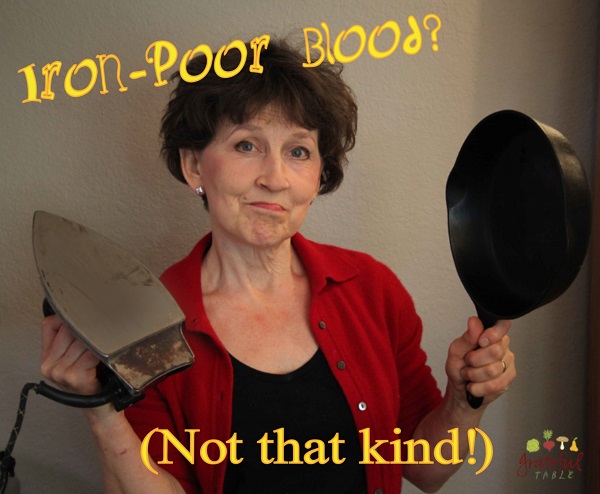 I have a tendency toward anemia. My iron levels were incredibly low at the onset of my first pregnancy, though the iron pill my doctor recommended did not work well. I didn’t absorb it! And thus began my battle against “iron-poor blood”. (Remember those Geritol commercials, older friends of mine?!)

I’ve learned a lot since. The internet makes research easier. So I boned up on iron facts. For starters, there’s heme iron, found in animal muscle meat and fish. It’s absorbs by the body quite well. Non-heme iron, on the other hand (from plant foods, eggs, milk, and meat too) does not absorb as easily. Also, the plant food sources usually contain phytates, which messes with absorption. Example: Cooked spinach is high in iron, but less than 2% of it is absorbed. (Compare that to the meat-sourced iron, of which up to 35% is absorbed.)

There are a few foods that can help us absorb more iron, when eaten in conjunction with iron-rich foods. A lot of us know that drinking a glass of orange juice along with that iron supplement, increases absorption. (Vitamin C does just that!) And apparently, adding meat to a meal can help too. Beef in particular can give us up to about 4-x as much absorbed iron. Whoot! Bring on that grass-fed cow, nom nom…

Despite a “healthy” diet, despite our best intentions, there are also those foods we might unwittingly consume, that inhibit the absorption of iron. As mentioned, phytic acid reduces absorption. I guess that’s part of why so many of us like to soak our beans, grains, nuts- that reduces the phytates in such foods. Sourdough fermentation helps too. When I make our weekly loaves of sourdough whole wheat bread, the phytates have been reduced by over 60%. Oh, and the fermenting helps make magnesium more readily absorbed- no wonder I love that bread! (Yeah, it’s that magnesium, right?!)

Another iron-absorption-inhibitor is eggs. Not that we don’t want to eat eggs, but we might not want to take an iron-rich food in conjunction with an omelet breakfast. On that same list of inhibitors are: Minerals (calcium, zinc, magnesium, copper), tannic acid (found in tea), peppermint, chamomile, coffee, and cocoa. Again, it’s not that we don’t want to eat those things (believe me, I WANT my chocolate), but when we are taking efforts to eat our iron-rich food of the day, we might not want to top it off with chocolate, coffee, and mint. At least, not all the time!