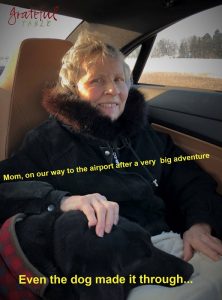 I know by faith that God is good, but sometimes, He really makes it clear. He showed me a lot this past month.

It started on a Thursday afternoon–my sister called to say my mom was in the hospital. It could be serious, or not. I might want to fly back, or not. Seeking godly counsel and praying about it, I realized by Friday that I needed to fly back to Michigan. (Thank you Lord, for the words of my friend, which encouraged me to go!) I let my sis know I’d be on Friday’s midnight flight, and was scheduled to arrive Saturday morning.

I had hours to get ready, put my ducks in a row, etc. I asked my Bible study friends to pray for the whole situation, and for travel mercies. Then Tom and I jumped in the car, checking flight reports on the way, since there was nasty winter weather ahead. Flights looked well so far. How nice to get latest updates on my fancy phone. How not-nice to discover as we approached the airport, that my Chicago-to-Flint flight was cancelled. I had now been booked on a flight arriving 24 hours later—Sunday morning. Ug. At that point, I wondered if I should just re-book a flight for later in the month. 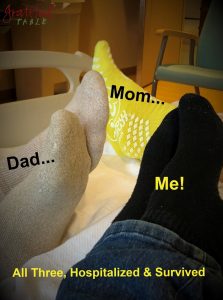 But—I had friends in high places, praying for those travel mercies. I was about to fly the friendly skies, but some things go higher than that. Like, the prayers of the saints! I put it in the Lord’s hands, and arrived in Chicago hoping for the best. To not have to spend a whole day there would be wonderful.

I went up to some ticket agents first thing in Chicago, asking if there was any way to get on an earlier flight. Three lovely agents huddled around a computer. They finagled until they got me on a flight leaving within the hour. It flew to my brother’s town of Grand Rapids instead of Flint, but that would work perfectly.

OK, that’s just the beginning of the story. Sorry—no “long-story-short” here. I wanted to establish that it was already a miracle that I ended up right where I was.

For most of the next three days, I was with my folks, sister, brother and his wife, at the hospital. For the next three days, we cheered mom on, seeing her through all she had going on. That was nice. But in hindsight, it appears there was an even bigger reason for being there.

Every night, my dad and I left the hospital for home, to rest up for another day. Each night, I noticed the house had a strange smell. The smell is still a mystery—something like burnt dog food and Pine-Sol. But not really that either.

I didn’t mention it to my dad–I didn’t want to be rude (maybe there had been some kind of doggy-do accident). The next day, I asked my sister and brother if they’d noticed a smell at the folks’ house, but they hadn’t. I finally asked my dad. He said yes, but he thought it was just from him burning some butter a few days before.

Well, by the third morning, I woke up around 5:30 with a killer headache. I heard the blood coursing through the veins in my head. Weirdest headache ever. I started vomiting yellow bile. I thought, “Oh no—I might have the flu!” Then I heard my dad—thought he was doing push-ups in the next room. Nope. From the floor of the bathroom, I could see him walking down the hallway, holding onto the wall, breathing heavily. “Dad, are you OK?” He said he was really dizzy, and had never felt like that before.

OK, maybe we both had the flu. I called my sister to let her know we might not visit mom at the hospital that day. By that time, my dad was almost passed out on the bed, and I was hanging my head out their bedroom patio door, vomiting more yellow bile.

I told my sister, between dry heaves, “I don’t know what’s going on Jean. Maybe we both have the flu. Maybe it’s that smell…” She wasted no time calling 911. Which was good, since things were getting foggy. I didn’t remember her second call back, when I told her I didn’t think we could make it downstairs and get outside…

The ambulance and fire department arrived pretty soon after that, thankfully. They quickly got my dad and me into the ambulance, and hooked us up to oxygen. They thought the dog was dead–she barely had a heartbeat. (They even called animal control to pick her up.)

Turns out, the furnace vent had sprung a leak. There was a 500 ppm carbon monoxide level in the basement where the furnace was. Those levels are life-threatening after three hours. We had a very close call. (The dog too, although she did revive once she got some fresh air.) I asked my dad if he would’ve called my sister, or 911. He realized that no, he would not have. If I hadn’t been there, my sister would’ve eventually gone to the house to find my dad and the dog. Not alive.

Moral of the story: God IS watching over us, and He loves us. He sent me to Michigan to help my dad live. Now my dad can continue to care for our mom, who has dementia. And he can see God’s mercy and love in action, and have hope.

Even though there is evil (sin) in this world (and carbon monoxide), and sin is in us, and the world’s not perfect, God does have a divine plan. He wants us to all know that Jesus died for our sins to give us eternal life, and He’s going to give us a chance to know that. A friend at a funeral last weekend mentioned that he’d observed that God intersects our lives at various points, trying to get that message to us. God can use all things, to get us to notice this. Truth.