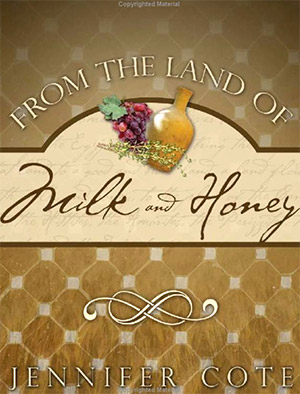 From the Land of Milk & Honey

Chef Jennifer Cote, owner of The New Deli Café in Pinole, California (est. 1985), shares recipes developed over her years of preparing favorites for local patrons. Jen shows how to produce memorable meals efficiently, through combining natural flavors, textures and techniques. The cookbook includes recipes for every occasion and food for the soul…favorite verses and thoughts about Christian living.

Jennifer’s recipes are easy and delicious. There’s something for everyone in here from homemade dressings to great pasta dishes to the most amazing peanut butter brownies you will ever taste. Nearly everything from scratch and its just incredible. 5 stars! 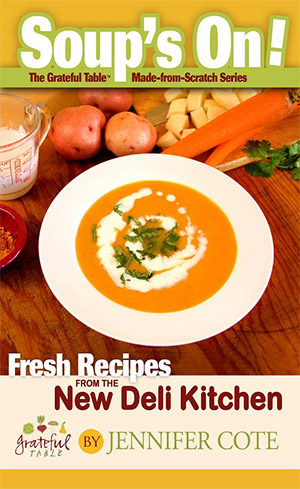 Soup’s On! (Made from Scratch)

Chef Jen shares favorite recipes, featuring whole-food ingredients and simplified techniques to save flavors, time, and nutrients. Most can be modified to suit various dietary needs, for low-salt, preservative-free, chemical-free eating. Many are gluten-free, using vegetables as thickeners instead of flour, and can work for paleo diets too.

Take advantage of methods, put “leftovers” to work, freeze extra for a busy day. Make a pot of soup. Make some memories. And enjoy good food.

Patrons of The New Deli know: a pot of homemade soup, made from scratch, is always on the stove. Confidently prepare fave recipes at home; these have been tried out on a discerning New Deli crowd, that always seem to say, “More, please!” 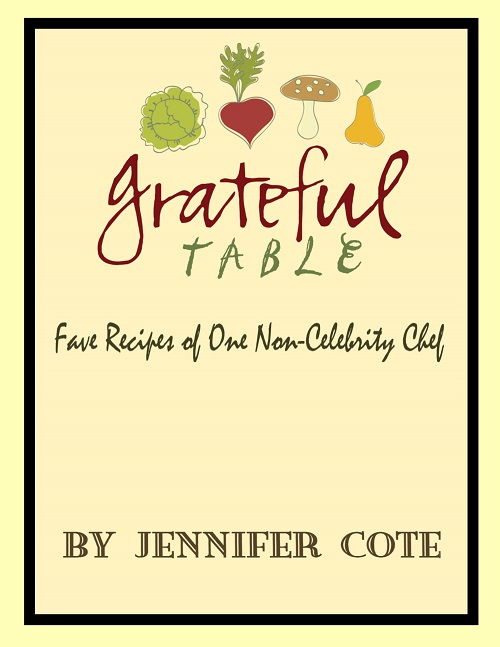 Not Published till Harvest House Finds Me!

Fave Recipes of One Non-Celebrity Chef

Of course you’re keen to learn some of my cooking secrets, right? After all, I apprenticed under Charles Hampton at Le Fri Brule, before meeting my lawyer husband, who swept me off my feet and promised to set me up in my own business if I’d only marry him. “And the rest was history”, as they say.
Except that that first part wasn’t really history. I didn’t study under any chef, except maybe the restaurant cooks I worked with at as a teen. (As a busgirl. Not very glamorous.)
I went on a friend date with the dishwasher, met his brother, and chased said brother. We married six months later, driving across the country on a five-week honeymoon, sleeping in our car whenever possible, to save money. OK, that sounds kind of homeless. But we did stay at campgrounds on special occasions (like when we needed showers). (OK, now that really sounds homeless.)
Reading material on that trip consisted of one hardback- Betty Crocker’s Cookbook. I took studious notes while cooking up meals on our Coleman stove (not simultaneously, mind you). I made corned beef and cabbage on St. Patrick’s Day, and 7-minute toffee in some random parking lot. I cooked lots of cabbage, veggies from the bargain bin, eggs and such, turning them into frugal dishes fit for a king. Or, well, for at least a lucky pauper.
Not bad for a newly-wed seventeen-year-old.
Fast forward seven years. Our wanderlust had brought us from the constraints of the Midwest, to the free-spirited West Coast. While employed at a health food store, a friend there talked me into investing in a vegetarian burrito business (being sold by one of the vendors). I began making hundreds of burritos at the crack of dawn, delivering to local shops. Within months, business was booming, I discovered I was pregnant, and Tom quit his day job to help me out. Money was rolling in, menu items expanded, and accounts increased.
But we were operating out of our home kitchen, mass producing packaged foods on saw-horse tables set up in the garage. I’ll admit, I was a bit proud that we had expanded to thirty-some stores throughout the San Francisco/Bay Area. But such success dictated that we get a real commercial kitchen as soon as possible.
We found a permanent, legit home for our business, hailing it “The New Deli”. Locals in West County weren’t too excited about our vegetarian specialties, but we powered through, succumbing to local tastes enough to include some basic sandwiches, as well as our trendier fare. At that point (1985), West Contra Costa was a bit more “country-style” than our home turf in the Berkeley area.
But things went full-circle. Eventually, the more upscale, modern crowd discovered us, and guess what they wanted? Some of that trendy vegetarian and homemade stuff we had specialized in back in the eighties. Yay!
But, you say. Why does any of this make you want to discover these particular recipes? After all, I did not study under Charles Hampton (hey, who is he anyway?). And I never had a stint on the Food Network. I don’t have a famous restaurant, and I don’t want to produce twenty cookbooks.
But I started from scratch, where a lot of us may be today. We’re not on the top of our game yet, but we want to do our best.
I did my best to prepare food that was the most nutritious and least labor-intensive, most flavorful, but least expensive. It was a model that has given husband Tom and me a successful, thirty-plus years running our sandwich shop with an innovative menu, happy palates, and thankful customers. It just might work for you in your home kitchen!

(Contact me about the status of this- currently unpublished…)