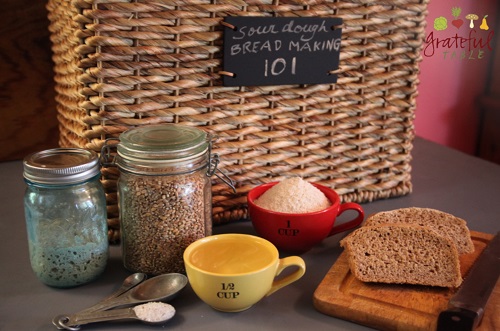 When I found out that even those with gluten intolerance can often partake of homemade sourdough bread, I was intrigued. Apparently, the sourdough fermentation process renders the gluten more harmless. A friend of a friend (who has celiac disease) can eat the sourdough bread she’s been baking. Awesome!

When I found out that the VitaMix could grind whole grains into flour, I was even more intrigued. My husband loves bread, and doesn’t seem to suffer any ill effects from it. But I figured, if I could feed him freshly-ground, whole grain, sourdough bread, he’d have the best of all worlds. What could be wrong with that?!

I had been disillusioned with store-bought whole wheat flour for some time, ever since finding out that it’s usually just all-purpose flour with a bit of bran mixed into it. If it was actual fresh-ground whole wheat berries, it would have a shelf-life of four days or so, and you know the stuff at the grocery stores sits around longer than that.

Not that I’m complaining. White flour (or “whole wheat” that’s just white flour with bran in is) has the benefit of not being rancid. Better that than some old 100% ground wheat berry flour that’s gone bad.

But back to this sourdough project. I got a Vitamix

, partly so I could grind fresh flours. The Vitamix is pretty versatile, and I was due for a new blender anyway. (Most blenders don’t last all that long…) I love my Vitamix! I CAN grind my whole wheat berries in it!

So the next step was to brew up some sourdough starter. It would take a week before the starter would be ready to use for bread making, and it would be like a pet, taking some attention two or three times a day, so I waited until after vacation.

My first batch was a dud. After two full days, nothing had happened, but I waited a bit longer, just in case. After four days, I realized it really wasn’t going to work. So I tried a slightly different method.

There are two great sites full of details on how to go about this; I tried  “Sourdough Home” first. Mike gives some great tips, but he didn’t mention stirring the brew several times a day. Is that why mine failed? I had left the first batch alone the whole time; I suspect it would’ve rather that I’d stirred it up a bit.

My second attempt was a hybrid of the first method and a method shown on “Breadtopia“. Eric also has some great tips and info, but I always want to streamline. I didn’t want to measure 2 TBS. of this, then 5 1/4 TBS. of that. It made it seem too complicated.

For my streamlined directions on how to make sourdough starter, check out this page!