A friend wondered: Is grape seed oil good? Answer- yes and no, but mostly no. (See Caroline Barringer ‘s article here). It’s been claimed that it can increase HDL-C (good cholesterol), and decrease LDLs (bad stuff), and it has a higher smoke point than many oils, for cooking (grilling stuff in a pan, etc.). But it is not as stable as olive oil; it’s more prone to oxidation, which isn’t good. Polyunsaturates (such as grapeseed oil) tend to oxidize when heated, even at low temperatures. They might not smoke as quickly under heat, but that doesn’t mean they’re actually good for you. 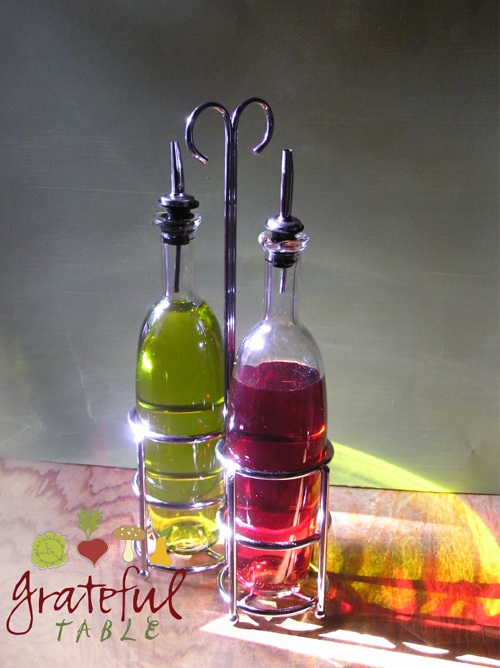 Grape Seed Oil comes from actual grape seeds after wine production, and might get confused with “rapeseed oil”, now also known as Canola Oil. But rapeseed oil is an entirely different animal, of the mustard/cabbage family. It was a somewhat toxic oil, but got genetically modified to make it more “fit” for human consumption. Without modification, it was high in erucic acid (which can damage heart muscle), and glucosinolates (which blocked absorption of nutrients in a study of its effect on animals). Not good! So scientific engineers went to work, creating a product they called “Canola Oil”, as it was developed in Canada. Bottom line: Canola Oil is GMO. Ew! I’ll be trying to avoid it whenever possible…

There are also the standard “PUFA”s (polyunsaturated fatty acids), represented in safflower oil, corn oil, and the like. Although food company marketing has touted such oils as “heart healthy”, you might read this article on Mark’s Daily Apple, for a completely different perspective. He takes about balancing the Omega 6 to Omega 3 ratio in our bodies, through eating the right foods. I changed my diet after reading that info, and noticed a dramatic change in the inflammatory-based symptoms I had. Those symptoms are gone!

Other oils are making the news these days, and I’ve been doing a lot of research. Thanks to Dr. Oz (who featured shows about them), coconut oil and red palm oil have become popular. But I’ll address those oils at a later date. For now, let’s focus on olive oil, a more common oil.

THE BEAUTY OF OLIVE OIL

1.) Proven Track Record: Olive oil has been used forever- it’s mentioned countless times in the Bible (well, I personally couldn’t count ’em…) Anything that’s been around that long speaks for itself. Newly created products might eventually show their (as yet, unforeseen) long-term health affects upon future generations, but with olive oil, we can rest assured.

2.) Fresh, not Rancid: A really cool thing about olive oil: it doesn’t require excessive heat to extract the oil from it. (Unlike other sources, like safflowers, corn, etc.). So the quality of the oil doesn’t deteriorate or get rancid from its exposure to heat during processing, as readily as other oils.

3.) Anti-inflammatory: Another plus is that olive oil is rich in polyphenols (antioxidants that have anti-inflammatory and anticlotting properties). Newly pressed extra-virgin olive oil contains oleocanthal, a compound that can act in a similar way to ibuprofen. Researchers say that a diet rich in olive oil may have pain-relieving and heart-health benefits similar to those of taking a low-dose baby aspirin every day.

4.) It’s Part of the Mediterranean Diet: Following the traditional dietary patterns of southern Italy, Greece, and Spain, has been shown to lower heart disease risk, lengthen lifespan, reduce cancer and diabetes, and help with weight loss. Sign me up!

5.) Reasonable smoke point: This means that olive oil has a smoke point of about 385-420 degrees. Granted, you don’t want to get a pan so hot that the oil you add starts smoking; that can create undesirable by-products. But to use olive oil to cook foods at mid-range heat presents no problems.

HOW TO BUY IT

, from Bariani): Cold-pressed means no heat was used during the processing. If that’s too pricey, opt for a more inexpensive extra-virgin olive oil for cooking, then splurge on a high-quality, unfiltered one for drizzling and dipping (when you’ll most appreciate its amazing flavor).

Dark Bottles: Dark-colored bottles will keep better, as light and heat can turn oil rancid. A dark cupboard works well for storing it in, or store it in an opague ceramic decanter. It can be refrigerated, but it will firm up (remedied by leaving it out for a half hour or so). Olive oil is best used within six months but can last longer if stored properly.

Organic: We can’t always afford it, but the world would probably be a better place if we spent more money supporting sustainable practices, and spent less money on excessive quantities of inferior products. We’d probably solve the obesity epidemic too!

3 Responses to “Oils- Which Are Healthy? (+ 5 Great Things About Olive Oil)”