I was a very enthusiastic kombucha brewer in the beginning. I envisioned mass quantities of the stuff being welcomed by throngs of New Deli employees and patrons. I bought a tea strainer the size of a man’s fist, got a whole case of blue, clasping-lid bottles, and had gallon jars of various strains of kombucha up on my top shelf.

Alas, it didn’t catch on. Most of the deli gang enjoys this Jun Kombucha more. It’s kombucha’s sophisticated, fancier cousin, brewed on green tea and honey; the “champagne” of kombuchas. I still drink “regular” kombucha daily though–it’s got its own unique probiotic profile. 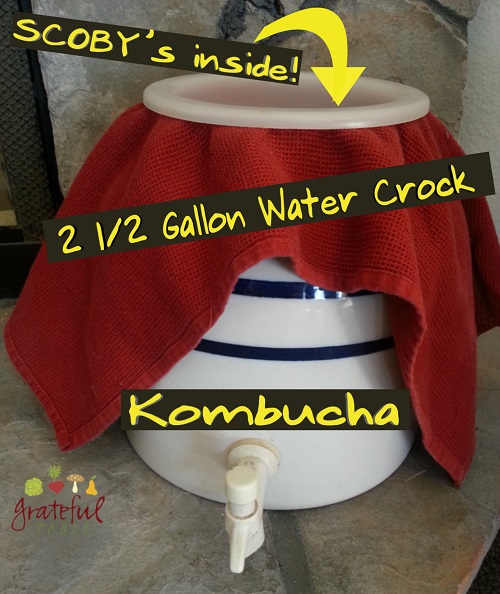 I was like a new mother in my early kombucha days, so nervous about my scoby. I’d carefully decant all but a few cups of the last brew, remove the scoby, clean the container, add new sugar/tea mixture (plus some of the old “starter” brew), then put the scoby back in…

Now that scoby stays in the crock/jar/whatever. I pour off most of the fermented kombucha, add new sweet tea to the receptacle, and I’m done. “Continuous Brew Style”–so much easier!

As for what receptacle to use, well…I thought a crock or glass decanter with a spigot would be handy, to fill bottles for the second ferment right from the tap. No! This was not easier! What was easier was getting a funnel, and pouring the brewed kombucha off the top, into bottles. The spigot method was slower than I’d hoped, although I still like my spigot jars, if only for pouring a bit of kombucha into a tasting cup, so I can determine if it’s “ripe” enough. So…use whatever works for you–a spigot jar, crock, or regular jar! I personally use a 2-quart square jar, so it takes less counter space. The 2 1/2 gallon crock might be too large for many of us..

Get some starter and scoby from a friend, or let a scoby develop on some store-bought, unpasteurized kombucha. OR, get this starter from Poseymom.

I speed up the brewing process when making sweet tea by brewing the tea in half-as-much boiling water, adding the remaining liquid in the form of cool water or ice-cubes. (I’m a lady-on-the-run and don’t want to wait for tea to cool off!)

Bring to a boil: > 4 c. filtered or spring water (not chlorinated tap water)

Pour boiling water into jar or tea pot with the tea in it, to brew for 3 or 4 minutes. Use: > 4 black tea bags or 1 TBS. loose black tea (or substitute green or white tea bags ocassionally) > Optional: > Extra tea for flavor (rooibos or yerba matte, etc., but not Earl Grey or citrus teas, as the oil in them inhibits scoby growth)

After the sweetened tea has cooled off,strain the tea out into another jar/receptacle.Add, stirring in until mixed: > 1/2 c. sugar (Not honey or raw sugar- that will inhibit growth)

When the sweet tea is cooled off, add to the gallon jar or crock that contains about 1 c. starter tea, plus the scoby.

Initial brewing may take 7-14 days. It will go through stages as the sugars convert. Early on, they break down into easier-to-digest sugars that actually taste sweeter, even though there is now less sugar in the brew.

The kombucha will be ready for its second ferment when the liquid is pleasantly tangy, but not too sour. If the kombucha gets neglected for too long, it will turn to vinegar. Kombucha that’s gotten pretty sour can still be used to make a second ferment, but will need considerably more juice to tone it down!

Continuous brews can yield finished kombucha after a week or so, depending on weather. (They finish faster in warm weather.) Then they can be decanted into bottles for a second ferment (which will take a day or two to get bubbly).

Add sweet tea to kombucha starter. The more starter tea there is in proportion to sweet tea, the quicker it will ferment. If more sweet tea is added to just a little starter, it will take longer to ferment. This info can help with “Kombucha Management”!

After about 7 days, the first fermentation’s probably finished. You might wait longer (taste it now and then). Don’t go too long, or it’ll become an undrinkable vinegar concoction!

Pour off some of the kombucha into bottles, for the “second ferment”. What remains will stay in the brewing receptacle; it’s the “starter” that will help the next batch along.

Add cooled, sweetened tea back into the crock/jar. After a week or so, check the next batch every few days, looking for that characteristic tang that’s not too sweet, not too sour. Continue the process, bottling some for a second ferment, or even just drinking it straight from the tap.

Replenish the crock with more sweetened tea. Rinse and repeat! Except, I don’t actually rinse my stuff except maybe once every six months or so.Then I strain the starter tea to remove the kombucha “debris” that collects, rinse the jar out, and keep going.

The beauty of the continuous brew method is that there is so much of the fermented kombucha in the crock, that when you add a quart or two of new sweetened tea on top, it gets fermented pretty quickly. In several days or so you can decant more. (Go by taste- it’ll depend on warmth, and your preferences.)

TEMPERATURE: If temperatures soar into the nineties for your Kombucha brew, that could potentially make it die off. In temperatures lower than the ideal 72 to 85 degrees, your scoby might just hibernate some. In that case, at least it will start regenerating once it’s brought back into a warmer climate. If your kitchen is just too cool, you might want to look into a heater strip (click on the one on the right, if you want to buy it on Amazon). I’ve put my kombucha crock on top of the fridge, using an old heating pad under several towels to warm it up some- that also works!

BLACK TEA IS BEST: The “Scoby” (“booch”, as it can be affectionately called) needs to (ideally) brew in a medium containing black tea. I have tried green and white teas (all from the same plant), but the scoby seemed to weaken after several ferments using only those teas. I’m sticking to black, which has all the right properties. Some additional rooibos or yerba mate can be added to that as well, for extra nutritional benefits, if you want. But keep adding black tea.

Annabelle of Kombucha Fuel gives a complete run-down on teas to use, from black to green, white, yerba mate, rooibos, herbal… (article here). Someone in the comment section there mentions using Puuerh tea, but from my research, it doesn’t sound like a good idea…

NO CHEESE CLOTH: Use a towel or such for covering the kombucha as it brews- this will keep out fruit flies, mold spores, and such. (Cheesecloth isn’t a fine enough weave to work well.)

BOTTLES:  I’ve been pouring a new batch of tea right into my gallon jar, decanting some right away into one of these blue bottles with the ceramic stopper. The kombucha will finish brewing in the bottle, building up carbonation along the way. (Add fruit juices or spices for flavoring, to make it like healthy soda!)

SCOBY HOTEL: You might want to house some spare scobys in their own “hotel”, in case the one you’re using goes south. (Like, gets black mold on it or something- definitely a bad sign.) The “Hotel” is just a gallon jar filled with kombucha; you add the older layers of scobys to it, and they’ll keep almost indefinitely. Eventually (every two to six months), the brew will collect an excess of yeasts- those brown tendril-like clumps floating around in the liquid. So, set the scobys aside and strain the liquid out of the jar, through cheesecloth, to catch the excess yeast. Clean the jar out well, as dead yeasts build up on the bottom of the jar. Then return the scobys to the clean jar, and fill it half with the strained kombucha, and half of some new sweet-tea brew. Good for another six months or so!

There are ideas for using extra scobys in spa applications- see this article from Kombucha Kamp. In my experience, the spa idea was horrible. Another idea: let it dry out, then give to your dog as a “jerky” of sorts. Another horrible idea, at least for my dog! (She just stared at it. Not impressed.)

MORE TIPS: Eileen from Phoenix Helix goes into full detail on many issues in this article on tips and troubleshooting.

CROCKS ARE DISCREET! If you need to brew extra big batches, this is for you. And other family members don’t have to be too concerned about the strange “growth”…

Below is a picture of the jar I gave to my friend. Note how bashful the SCOBY is- hiding behind the note, haha! 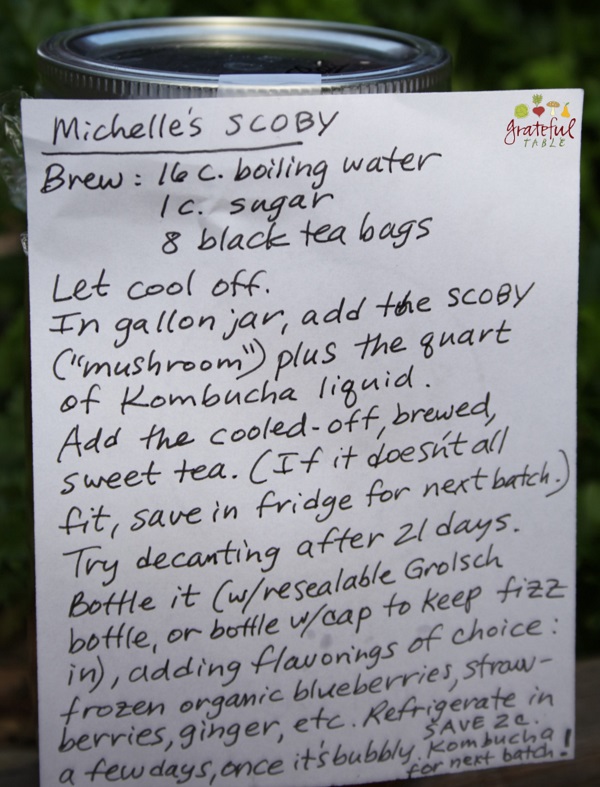