This is part of a series on Core Ingredients (how to cook them). Find more in this post: How to Cook (and Use) Millet 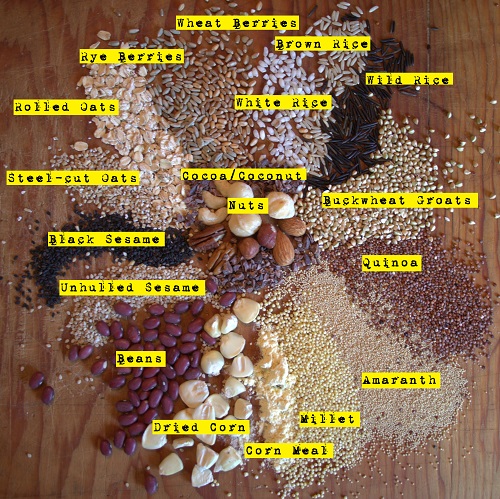 I could imagine that you really do want to know how to cook every grain. That you want to know all these details. But I’m coming to realize… most folks aren’t as “into” this as I am! My son stopped by the office, seeing my photo of grains on the computer. “Whatcha doing?” I told him I was adding text to the photograph, so people would know what the various grains looked like. What does he say? “Mom, you’re a nerd.” Guess that settles that!

But hey, my buddies kept asking, “So, what’s amaranth again?” (I’ve been adding it to a breakfast bar recipe I’m developing, so they keep seeing it pop up…) If they’re wondering, I figured others might too. So I decided to go through the grain list, in alphabetical order below, and tell you what I’ve come to know about these various grains, nuts, and seeds. (There’s more info on these foods in my post on “High Phytate Foods“.)

Amaranth: My first purchase of amaranth sat in the cupboard for half a year; after I’d bought it, I did some research. One study showed that, the more amaranth used in a blind taste test of baked goods, the less the test subjects liked it. In other words, positive response was in direct relation to how little amaranth was in any given sample. This did not inspire me!

But I knew it was gluten-free and high in digestible, usable protein. And that it has lots of calcium, magnesium, and iron. And that it’s gluten-free. Amaranth means “everlasting” in Greek, and the Aztecs warriors were sustained by it. So it must have something going for it. So I researched how to actually use the stuff.

It looks like many frazzled cooks have consulted forums on the topic of how to cook amaranth. Made with too much water, it turns into a gelatinous mess; if it’s undercooked, it’s tough.

My solution is to soak the seeds/grains for a full day, before doing anything else. This will make them more digestible, and they should cook better too. Time permitting, I’ll even strain and rinse the amaranth and let it go another day (upon which they start to almost sprout). At this point, I drain them again and do one of two (or three) things:

1.) To 1 c. of soaked grain, add about 2 1/2 c. boiling water; cover, simmer 25 minutes or so, and serve in a pilaf-type recipe. It’s probably best to mix the cooked amaranth with another grain (rice or such), since that will mask the slightly gelatinous nature of the amaranth beast.

2.) Or, after soaking, add to a very hot iron skillet, a few tablespoons of amaranth at a time, stirring constantly. They will start popping; push the done grains to the edge and add more amaranth to the center of the pan, repeating until all of it is popped. Add this to baked goods, or continue on to actually cooking it in some water.

3.) Roast the soaked amaranth. This is easier than popping them in a pan. It lends a slightly nutty flavor; it can be cooked in double the amount of water, after the amaranth has been soaked and rinsed. Add to breakfast bars or other baked goods, or pilaf recipes. (Recipe for breakfast bars here.)

Beans: Easy- just soak overnight, before cooking the next day. Add a tablespoon of vinegar, if desired. Soaking will make the beans more digestible, AND, they cook faster!

Buckwheat Groats: This grain is almost as soft as oat flakes, which means that, even without a flour grinder, one can make buckwheat flour. A small, electric coffee grinder (or small food processor) will do the trick. Perfect for fresh-ground, gluten-free pancakes!

Buckwheat is also a nice grain to add to breakfast recipes (see this breakfast bar recipe). Or, toast the groats first, to use (like rice) in meals. Toasting brings out flavor, and improves texture. Some places sell buckwheat toasted, or toast your own by adding to a medium hot pan, stirring until all grains look toasty.

To cook as for rice, add 1 1/2 c. boiling water to 1 c. toasted buckwheat in a small pot. Bring back to a boil, then turn on low for 10-20 minutes, until water’s absorbed and groats seem tender.

Cacao Nibs/Chocolate: I’ve enjoyed “raw cacao nibs” in my smoothies, and in coconut bark. But I’ve started baking the nibs a bit, as I’ve heard that cuts down on the phytates, and brings out the flavor. Best of both worlds!

More Grains: What?! I’m only halfway through the “C” grains/nuts/seeds?! I will have to cover the rest of these at a later date… In an upcoming post, I’ll go through these:

5 Responses to “How To Cook Amaranth, Beans, Buckwheat, Cocoa Nibs”