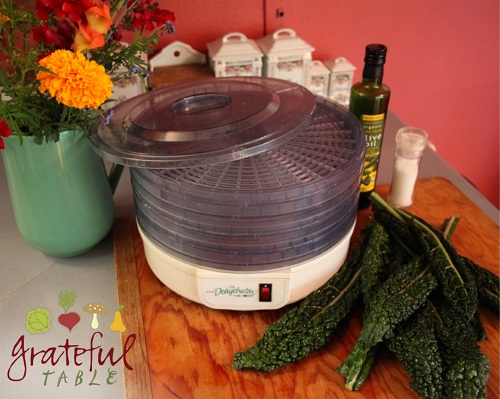 With twenty-some fruit and nut trees, we occasionally get bombarded with an overload of one crop or another. Not that I’m complaining! But it can get overwhelming. By fall, the sight of persimmons covering all my three-tier plates and taking up a shelf or two in the fridge starts scaring me a little. I know what I need to do at that point though: get out my dehydrator

Apricot season just finished up, and before we could get tired of those, I dehydrated halves of them. Didn’t have to throw any extras into the compost pile.

My friend Joanna brought me some of her kale chips earlier this year, dehydrated in her dehydrator. It was a handy, healthy snack in the midst of the other fare offered during floor hockey season at our church. I’d much rather munch on those than on some nachos! They were great.

So when my other buddy Sarah gave me an overload of kale from her dad, I thought I’d make some kale chips too. I didn’t add anything to them, and they were pretty inedible. But after that, I learned to toss ’em with a little virgin olive oil first. For the next batch, I rubbed the oil onto each leaf. Sprinkled a little sea salt on too. They were dee-licious! Quick too- they were ready in about two hours. (At least twice as fast as most fruits, which have more moisture.)

If you have a mandolin slicer, you can give sweet potatoes the same treatment. Just slice ’em real thin, toss with olive oil, and dehydrate. If you don’t have one yet, you might want to get a mandolin slicer. The ones with a porcelain blade stay super sharp. We got a few porcelain knives

for the deli, for when we needed to slice tomato wedges and didn’t have time to sharpen our other knives- it stays really sharp, pretty much forever.

For my next experiment, I’ll trying something more like the recipe posted on the “From Scratch Club” site. For Swiss chard, they suggest adding some lemon and honey too. I’ll skip the honey (as it would make for a stickier snack), and maybe try a dash of palm sugar instead. Maybe a spice or two.

The dehydrator’s so handy, when I’m tired of steaming or sauteeing. I guess it’s real great for raw food enthusiasts as well. If you love fruits and veggies, or have your own fruit trees, it’s a worthwhile investment.

Not that everything works in the dehydrator. I had hoped to produce a sugar-free plum fruit leather once our plum crop had come in, but the tartness of the original fruit seemed to multiply, far more than any sweetness did. It was deemed inedible by all.

I haven’t even begun to explore making beef jerky from the grass-fed beef I’ve got in the freezer. It’s on my list though. I hear you can make salmon jerkey too… More experiments lie ahead!