It’s not just an exclusive club that gets hit with Alzheimer’s and Dementia. Anyone can fall prey to these horrible conditions. But truthfully, I hadn’t given it much thought until earlier this year, when my 73-year-old mother became suicidal, paranoid, and delusional. 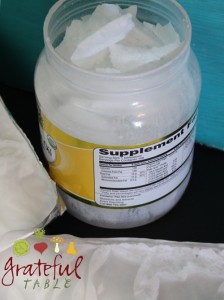 Let the oil melt in a low-temp oven (or use double boiler); pour onto aluminum foil, chill, then break into easy-to-use pieces!

Mom had always been a fun, loving, intelligent, faith-filled woman. Who was this new person? The doctors had just diagnosed her with Alzheimer’s, and I had begun a mourning process. I was grieving the loss of “mom”; I hardly knew this new person.

Friends and family began praying, and I also began an in-depth study on Alzheimer’s and dementia. While there has been little breakthrough in treatment or prevention, Dr. Mary T. Newport’s studies proved hopeful (find her book on Amazon here). She began researching in hopes of treating her husband, and found some promise in coconut oil, which is an excellent source of medium-chain fatty acids (MCTs). The Alzheimer’s brain is insulin-deficient, but the MCTs provide fuel, leading many patients to a stabilization or even a reversal of symptoms.

This was the best news I’d heard yet. I’m now keeping my mom supplied with a “coconut bark” confection I make regularly (see recipe here), and she’s been using coconut oil in her oatmeal. Months later, she has (oh, so thankfully) been given a better diagnosis. And while she is also receiving some drug therapy, the coconut might be helping too. We’re going to keep eating it, just in case! 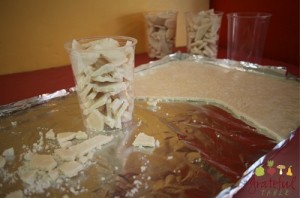 Next step, how to make coconut oil handy to use? It doesn’t have to be refrigerated, since it’s so stable, but in colder climates, you might find a jar of coconut oil to be a hard, solid mass, difficult to get out of the jar. If that’s the case, warm it on a double-boiler (or in a low-temp oven), to melt it, then pour melted contents onto aluminum foil (with a little ridge around the edges). Let sit overnight on counter; by morning, the coconut oil will firm up. Once firm, break into pieces, making it much easier to use.

This method works particularly well for coconut butter (AKA “coconut manna”, “coconut spread”, or “coconut cream concentrate”). Such products contain the coconut meat and fiber too (not just the fat), so they need refrigerating. If the jar’s been processed into chunks (as mentioned above), the refrigerated chunks will be much handier to use than trying to chip some off the solid block.

I add coconut “manna” to my smoothies every morning; my husband adds it to his oatmeal too. Have you tried using coconut oil (or cream, manna, spread, etc.)? What did YOU think?! (Comments welcome :D)

6 Responses to “Coconut Oil for Mental Health: Why/How To Use, Where to Buy”